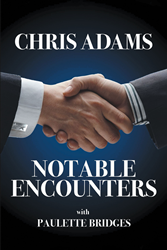 Adams writes, “The author characterizes the book as a memoir, entitled, Notable Encounters. As such, he has diligently documented his recollection of dozens of memorable special people that he enjoyed the unique opportunity of meeting over the years of his professional experiences. Many of the names of those whom he had the pleasure of meeting are easily recognized, while others are introduced to the reader for the first time. Beyond identifying and characterizing his meeting opportunities and the interaction with those encountered, he has for the benefit of the reader, provided an in-depth biographical background summary of each personage. As such, his treatise serves also to recall history, significant times and events in many instances. A number of those whom he had the pleasure of meeting became friends for life, while other introductions were the first and last. An interesting perspective that he also introduces in the opening of his writing is one of the history and importance of the handshake. He characterizes that virtually every encounter, greeting, or meeting between two people is initiated with a handshake. The handshake, a practice that has existed in some form or another for thousands of years, most often engaged upon an initial meeting or greeting. The purpose of clasping hands—to convey trust, respect, balance, and equality. Join Chris Adams in encountering, exchanging handshakes and engaging some noteworthy and incredible personalities along his life’s journey.”

Published by Christian Faith Publishing, Chris Adams’s new book is a breathtaking collection of invaluable encounters over a colorful lifetime that is sure to impart more than a few gems of lasting wisdom in its attentive readers.

For additional information or inquiries about “Notable Encounters”, contact the Christian Faith Publishing media department at 866-554-0919.