FAITHWORKS PICTURES releases its first film NATIONWIDE on Tuesday, April 7, 2020 in USA and CANADA during Holy Week just days before Easter. The film, which the filmmaker describes as, a “A LOVE LETTER TO CHRIST” takes us on a journey into the Holy Family and the spiritual war that rages on between good and evil with a mission to inspire Faith and Hope at a time when the world is searching desperately for answers. 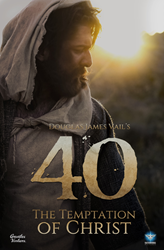 We wanted to step inside this story, feel these struggles with Christ, and then let Him lead us out of them.

The movie, 40: The Temptation of Christ, hails from FaithWorks Pictures, an independent Christian Film Production Company based in Southern California that aims to deliver the Gospel message through motion pictures. Gravitas Ventures, a worldwide film distributor and subsidiary of Red Arrow Studios is releasing the film in the USA and Canada on Tuesday April 7, 2020.

This is Douglas James Vail’s directorial debut. In collaboration with screenwriter Reed Lackey, Douglas independently funded, produced and directed the film. The story of the Temptation of Christ is described in the Gospels of Matthew, Mark and Luke. After being baptized by John the Baptist, Jesus Christ was led by the Holy Spirit into the Judean Desert for 40 days and nights. During this time, Satan came to Jesus Christ and tempted him.

Available on DVD, BLU RAY, and VIDEO ON DEMAND everywhere, the film explores multiple themes: the urgency of faith, the need for God, God’s pursuit of people, and the relentless efforts of the Enemy to undermine our hope, our future, and our character. The Enemy challenges us with deceivingly tempting choices that lead us away from God and into destruction. The movie arrives at a time when the country is looking for answers to its toughest questions. The safety and well-being of the American people is rocked by a war against the pandemic that President Trump refers to as “The Invisible Enemy.”

Douglas James Vail said, “No one could have predicted the Coronavirus Pandemic would coincide with the release of the film. The public health crisis forced us to reroute our distribution strategy because our theatrical plans were forced to cancel. To me, delaying the film was not an option because the film is needed now more than ever. Fortunately our distribution partner, Gravitas Ventures, worked closely with us to ensure a timely Holy Week release leading up to Easter.”

The writer of film, Reed Lackey, was tasked with the enormous challenge to write a full-length feature that centers around a biblical account described in less than 400 words. It was important to Lackey that his screenplay would intrigue the audience, raise challenging questions, offer insight into the Temptations themselves, and provide clarity to the Gospel message. Lackey was committed to maintaining reverence for the sacred texts, while exploring the story and its themes in an inventive and unique way.

“The biggest creative challenge,” Lackey said, “was to tell a story countless people think they already know in a way that makes it feel fresh and new. We didn’t want a new story, but we wanted it to strike each of us in a new way. What would these temptations look like? How could we present them as both deeply personal and also broadly universal? Because these aren’t relics of history; these choices face us every day. We wanted to step inside this story, feel these struggles with Christ, and then let Him lead us out of them.”

Among several creative ideas explored in the story, the film uses specific verses from scripture to give voice to its lead, Jesus Christ. Every word spoken by Jesus, in the film, is taken directly from books in the Bible. In addition to that, the film weaves in childhood memories of Jesus which provides the viewer detailed insight to his parents, provoking further contemplation as to what it might have looked like to raise the Son of God.

Vail added, “Mary and Joseph were chosen to care for this child, the Son of God. If you think about it, it’s the greatest privilege and weight at the same time. For most of us, who are parents, we will have the opportunity to stumble while we influence our children the best way we know how. Mary and Joseph were asked to do so much more. The role of a father and mother is so desperately important and this film reminds us all of the priority of family. The role each parent has and the gift of service we give to our children is so vital to repairing the domestic church, the family, the building block of America. Children are gifts from God. We honor God when we raise our children. As fathers, we must be attentive to our children and stay present. As mothers we must nurture our children and keep them encouraged. As husband and wives we must be pillars together and learn to love and forgive. We all make mistakes, we need to love more. The American family needs a comeback. It’s time to make families great again. Hopefully this film will move the needle forward, help move America forward. I always believed, in my heart, this film would play a unique role in society because it always felt much bigger than me. I am so incredibly grateful I was used by God for this purpose.”

It is the hope of the filmmaker that audiences approach this film, not merely as an entertainment piece, but as a thoughtful and prayerful meditation on a vital, timeless story. The creative team wants to invoke your curiosity, contemplate the mystery of life, hear scripture read aloud, and awaken your spirit to the God of the Universe who is pursuing you.

About FaithWorks Pictures
Faithworks Pictures launched by Douglas James Vail in 2017. It is an Independent Film Production Company that aims to glorify God through motion picture. Faithworks Pictures does this by making films about His Son. This means each film must speak of either who Christ is (His Character), what Christ Says (His Word), and what Christ is doing (His Mission). To put it simply, every story has a hero. The hero of each and every story we tell is Jesus.

40: The Temptation of Christ (2020)Jesus encounters Lucifer in the Judean Desert.

40: The Temptation of Christ (2020)Jesus enters the Judean Wilderness for Forty Days

40: The Temptation of Christ (2020)Lucifer proposes an alliance with Jesus to rule over mankind.

40: The Temptation of Christ (2020)Three Temptations are foreshadowed in the wilderness.

40: The Temptation of Christ (2020)Joseph explains the reason and religious significance of the sacrificial lamb to Jesus.

40: The Temptation of Christ (2020)Mary consoles Joseph who is worried about the future of their son, Jesus.

40: The Temptation of Christ (2020)Lucifer holds the captive lamb.

40: The Temptation of Christ (2020)A Roman Soldier is hammering a nail into the hand of Jesus during the crucifiction of Jesus.

40: The Temptation of Christ (2020)Jesus and Lucifer meet on the temple.

40: The Temptation of Christ (2020)Jesus rescues the captive lamb from Lucifer after rejecting Lucifer's final temptation.