The Holy Land is the birthplace and resurrection site of Jesus Christ. Christians around the world hold this area in high regards and thousands of people take pilgrimages of faith to the Holy Sites it houses each year. However do to extreme political and economic hardships spanning decades in the Holy Land, Christian individuals and families are fleeing their homes. Franciscan Foundation for the Holy Land (FFHL) gives their expert opinion on how Christians around the world can help their brothers and sisters in the Holy Land. 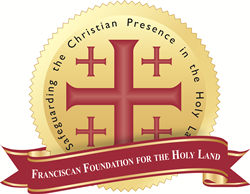 Franciscan Foundation for the Holy Land

“Jesus was born in the Holy Land. We (Christians) have a stake here. This is where Christianity began.”

Since Israel was founded in 1950, Bethlehem has gone from being an 80 percent Christian population to just 12 percent in 2018. With competing faiths and governments in the Israel and Palestine territories, Christian communities are disappearing in the home of Jesus Christ. While Christians are not always outright attacked or forced into exile, there are policies in place that make it very hard for those of Christian faith to succeed. Year over year with opportunities to seek success in more welcoming countries, Christians have consistently emigrated out of the Holy Land.

Having lived in the Holy Land for over 30 years, Father Peter Vasko, OFM, understands the plight Christians face on a daily basis and the hurdles they must overcome to gain basic human necessities. As president of Franciscan Foundation for the Holy Land (FFHL), Father Peter works tirelessly to supply the opportunities and skills Christians need to build a strong home for their families in the Holy Land. FFHL builds housing, coordinates job placement programs, offers university scholarships and educates youth as a part of their mission – providing a voice for Christians living in the Holy Land worldwide and ensuring the continued Christian presence in the area.

The importance of keeping Christians and our faith in the Holy Land goes back to the roots of our beliefs and religion. Father Peter says, “Jesus was born in the Holy Land. We (Christians) have a stake here. This is where Christianity began. If we do not have a sense of who we are as Christians, what do we have? It is our heritage. If you do not have interest in the outcome of the Holy Land, I do not know if you can call yourself a Christian.”

Christians in the United States and around the world can help their brothers and sisters in the Holy Land. Prayers are always powerful and welcomed on behalf of the communities there. You can also donate to one of many FFHL programs that helps Christians lead better, fuller lives. No gift is too small, no prayer too quiet.

Father Peter is visiting the United States on a brief trip where he will meet with key stakeholders and FFHL members working to solidify Christianity in the Holy Land. During this trip, Father Peter is available to speak directly with news outlets and interested parties regarding FFHL’s mission, the plight of the Holy Land Christian and how the Christian community can assist.

Peter Vasko, OFM, entered the Franciscan Custody of the Holy Land in 1981, after a ten-year career in marketing and public relations. He served as the English Definitor for the Custody of the Holy Land under four administrations for a period of thirteen years, as well as on the Franciscan Custody Board of Directors, representing the six countries in the Middle East that it governs. He also served on both the Custody’s Finance and Sanctuary Pilgrimage committees. Actively involved in the international diplomatic community in Jerusalem, Fr. Peter is the liaison and guide for the White House through the U.S. Embassy, as well as with the municipality of Jerusalem. He also serves as Chaplain for the Marine Security Guard for the U.S. consulate in Jerusalem. Currently Fr. Peter is the President of the Franciscan Foundation for the Holy Land, a position he has held for more than 25 years. Fr. Peter is a member of the Catholic Speakers Bureau CMG Booking.