Christina Cheek Ross’s newly released “The Life and Times of Carroll B. Cheek” is an enjoyable and nostalgic study of an enigmatic life

“The Life and Times of Carroll B. Cheek” from Christian Faith Publishing author Christina Cheek Ross is a fascinating memoir that takes readers on a life journey during the Great Depression, World War II, and so much more. 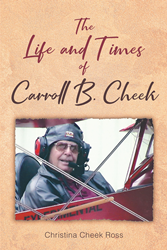 “The Life and Times of Carroll B. Cheek”: an entertaining life journey. “The Life and Times of Carroll B. Cheek” is the creation of published author Christina Cheek Ross, a board-certified Polarity Practitioner (BCPP) practicing energy medicine for over 2 decades. Ross has received bachelor’s degrees in both psychology and physics from the University of North Carolina at Greensboro. She received her PhD in Energy Medicine from Akamai University in Hilo, Hawaii. Ross’s dissertation involved research at the Wake Forest School of Medicine’s Institute for Regenerative Medicine, studying the therapeutic effects of extremely low-frequency pulsed electromagnetic field for the treatment of pain and inflammation. She hopes to one day teach energy medicine to medical students interested in alternative medical applications for pain.

Ross shares, “Born into a lower-middle-class depression-era farming community in northwestern Missouri, Carroll B. Cheek was a product of his time. During the depression, there was a constant fight for survival. Jobs, housing, even food were scarce. Farming kept families alive. Children worked to help support the family. Everyone did their part. Play was a luxury few people enjoyed. To put it mildly, the United States of America was in crisis. Not before or since the crash of 1929 that caused the Great Depression has the US posted such high unemployment rates, low salary wages, and lack of sustainability. People relied on each other. Everyone but the very rich suffered.

“The outbreak of World War II provided jobs, whether in the military or on the home front. Everyone pitched in for the war effort. After the war, military personnel came home to a thriving economy, where suburbs were developed outside major cities. The age of convenience was born in the 1950s, and processed food filled the grocery stores. Track housing was designed to mass-produce shelter and appliances relieved the hard work of washing clothes, cleaning floors, and preparing food.

“Cheek, as he came to be called, was prepared for anything life could throw at him. Known in the world of racing, Carroll Cheek was something of an enigma. He knew mechanics. He could build any type of engine. This understanding seemed natural to him as he did not go to college or trade school to learn mechanics. While he had jobs in the world of automobile mechanics, dairy distribution, and his own company of oil and gas storage, Delta Tank, he always migrated back to his first love–building and restoring engines. He built race car engines. He built airplane engines. He built dune buggy and motorcycle engines. To say he liked to “go fast’” is an understatement. He loved to go fast! The faster, the better. He far exceeded the nine lives allotted to any human being. He survived multiple race car, motorcycle, and airplane crashes. He lived with someone else’s liver in his body. He made surviving death an art. This is the story of a man who knew few boundaries, always creating new ones, and lived life on his terms. This is the story of the life and times of Carroll B. Cheek.”

Ross provides a heartfelt celebration of her father’s adventures within the pages of this delightful biographical work.

Consumers can purchase “The Life and Times of Carroll B. Cheek” at traditional brick & mortar bookstores, or online at Amazon.com, Apple iTunes store, or Barnes and Noble.

For additional information or inquiries about “The Life and Times of Carroll B. Cheek,” contact the Christian Faith Publishing media department at 866-554-0919.