The memoir shares an insider’s view of the legendary world of ‘80s and ‘90s rock ‘n roll, life as a famous Centerfold and model, and life at the Playboy Mansion. 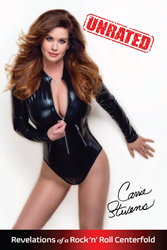 “My story is about more than just survival; it’s about soulmates, embracing loss, and overcoming the most unforeseen of obstacles.” Carrie Stevens

Carrie Stevens, a celebrated American actress and model known as Playboy Magazine’s ‘Miss June 1997,’ announced this week that her tell-all memoir, UNRATED: Revelations of a Rock ‘n Roll Centerfold, is now available for purchase in all formats.

Regarding her memoir as a ‘haunted love story’ that details her intense relationship with Eric Carr, the drummer from KISS who died of cancer almost 30-years ago, the book is a captivating tell-all that shares an insider’s view of the world of rock ‘n roll royalty as the love of Eric’s life, an aspiring actress in Hollywood, a world-famous Centerfold, and her most important role as a single mother and only parent.

“Carrie’s courage, honesty and humor in telling her life story is not only gripping and entertaining, it’s a testament to her strength and perseverance in going after her goals,” said Christina Scott, Carrie’s manager.

Having landed gigs in hit TV shows, motion pictures, and appeared in magazines such as Cosmopolitan, Glamour, Allure, and Playboy Magazine, Carrie has had a vibrant and memorable career, with life experiences to match. She has acted with Charlie Sheen, Jennifer Aniston, and Hilary Swank, as well as Mark Wahlberg, and starred in independent films opposite Jennifer Love Hewitt and John Taylor. She also appeared as a guest star on Two and a Half Men, Beverly Hills 90210, and Days of Our Lives.

“My story is about more than just survival; it’s about soulmates, embracing loss, and overcoming the most unforeseen of obstacles,” said Carrie. “As COVID-19 ravaged the world at the start of 2020, I decided to use the time to finish this book, in an effort to both share my story, as well as inspire women around the world who want it all,” said Carrie. “From being a Playboy Centerfold to becoming a mother, I want my story to be an example that empowers women to do and be anything they want, with no barriers.”

UNRATED can now be purchased on Kindle for Amazon, and Audible in addition to the original paperback and hardcover versions also available on Amazon. VIP packages and signed copies are available to purchase on CarrieStevens.com.

Carrie Stevens is an American actress, model and entrepreneur. Born in Buffalo, NY, she grew up in the small town of Hardwick, Massachusetts. Carrie studied Journalism at Memphis State University while modeling locally. In the early ‘90s she packed her bags and headed for Hollywood, never looking back. Carrie has landed dream jobs on hit TV shows, in major motion pictures and appeared in major magazines such as Cosmopolitan, Glamour, Allure and as Miss June 1997 in Playboy Magazine. Carrie is the founder of skinnysnaX, a revolutionary invention by her scientist father that harnesses the power of molecular hydrogen to control hunger while intermittent fasting, promoting weight loss while fighting inflammation and aging. It was recently announced that Carrie is a producer on the authorized documentary about the late KISS drummer Eric Carr. The documentary is currently in production and scheduled for release in late Fall.

Although she’s had an incredible career thus far, her proudest achievement is raising her son who is an awesome human being and already an accomplished young man.