“Pocket Angels” from Christian Faith Publishing author Christine Righthouse is a collection of thoughts born from a mother’s love. It is a story that promises love, hope, friendship, and laughter; as well as a promise of words from the Scripture, of angels, and lastly, of Heaven. 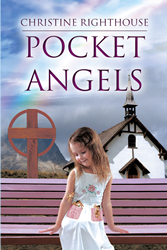 “Pocket Angels”: a heartfelt piece written after the author’s deceased daughter’s presence visited her one sudden evening. Out of the emotions she felt towards that short vision, she began writing this book that teaches Bible stories through flashbacks of her daughter Lena’s life. “Pocket Angels” is the creation of published author Christine Righthouse, a devoted wife and mother living in Indiana. She also released a book about her daughter, Lena, in 2001.

Righthouse shares, “Twenty-three years after Lena was taken from her family in 1996, her mother, Christine, had a vision of Lena sitting in heaven. She was dressed in a white dress with a white pinafore apron which contained a pocket. Lena was playing with something flying in and out of her pocket. At first, Christine thought Lena was playing with butterflies, but then soon realized she was playing with small cherub angels. The stories in this book were provided by the guidance of Jesus Christ our Lord and were inspired by Christine’s thirty-five years of teaching Sunday school. Lena, the main character, teaches her pocket angels lessons from the Bible which she learned growing up in church. At first, the pocket angels do not recognize they are angels. They think they are just Lena’s friends, but they soon learn that Lena is more than just a friend. From her, they learn valuable life lessons on how to behave and react to difficult situations. Lena teaches them why bad things happen to good people and that there’s a beautiful place in heaven for all children who come there.”

For additional information or inquiries about “Pocket Angels,” contact the Christian Faith Publishing media department at 866-554-0919.