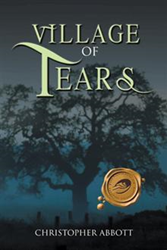 Abbott tells a story that readers will both identify with and be inspired by. Caleb is both an “everyman” and an incredibly courageous role model – interestingly, Abbott was inspired to write “Village of Tears” by actual events.

With a handful of television shows about people finding, buying and selling historical artifacts and two entire television networks dedicated to history, Americans’ interest in preserving and learning about history cannot be denied. But, as Christopher Abbott shows in his new historical fiction novel, “Village of Tears” (published by Trafford Publishing), American history is full of dark secrets.

During the Civil War, Franklin Carver, a young slave, made his way north to find freedom. But he was tragically betrayed, becoming the casualty of a dark conspiracy. The details of Carver’s death would lie tucked away for decades. Caleb Magellan, an attorney, stumbles upon Promise, a sleepy town in rural northern New Jersey, almost 150 years later. Caleb uncovers evidence that the community’s affluent residents might hide a dark secret. He digs into the twisted history of the town, eventually uncovering a truth that might threaten to shatter the nation’s conscience. But the people of Promise will go to almost any length to keep their secret under wraps, and Caleb soon finds himself in a very precarious situation.

Abbott tells a story that readers will both identify with and be inspired by. Caleb is both an “everyman” and an incredibly courageous role model – interestingly, Abbott was inspired to write “Village of Tears” by actual events. “A friend of mine was renovating a Civil War-era building in New Jersey, and he found some interesting artifacts, including shackles, hidden in the walls,” explains Abbott.

Christopher Abbott is an attorney living and working in eastern Pennsylvania.