The J Series Mechanical Watch is designed to embody the art of Karesansui. 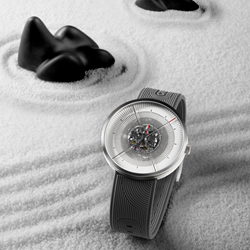 The watch is intricately inspired by Karesansui, also known as “Japanese rock gardens,” or “Zen gardens,” gardens of intricate sand, stone, and gravel that represent water and mountains that are synonymous with tranquility.

On July 7, CIGA Design launched the J Series Mechanical Watch on Kickstarter and surpassed its funding goal within an hour. The watch is intricately inspired by Karesansui, also known as “Japanese rock gardens,” or “Zen gardens,” gardens of intricate sand, stone, and gravel that represent water and mountains that are synonymous with tranquility. The mechanical watch is available on Kickstarter for the super early bird price of $369 USD.

When CIGA’s design team set out to find inspiration for a Zen-themed watch, they found Karesansui to be the perfect source. The gardens are often used by Japanese monks to aid in meditation, and are believed to have a calming effect.

“The art of Karesansui dates back centuries and allows people to focus on their hearts and live as they wish in a noisy, hectic world,” said CIGA Design CEO and Founder Zhang Jiamin. “We have designed every element of the watch to be instilled with the Zen of these gardens for a truly unique mechanical watch.”

The watch’s comfortable, sweatproof, and elastic silicone strap features the lines of Karesansui. A stainless steel strap is also available. The J Series has a patented floating hour hand that hovers above the skeleton movement. As it turns, it is as if the two parts come together to represent how an individual communicates with the world while pursuing a deeper essence within themselves. Meanwhile, X-shaped equal-length double hands span the entire dial, breaking the time reading tradition of most watches. The hands cross at different times to form differing visual effects for a highly impactful appearance.

The dial includes 120 fine lines and a pitch of just 0.3mm, the ultimate micron precision for an intricate and complex design. A dual-hollow design provides a look into the mechanics of the watch to view and admire the craftsmanship on a deeper level as the wearer sees and feels the watch at work.

The CIGA Design J Series is equipped with original Japan-made Citizen Miyota Movement. The movement frequency is 21,600 times/hour, 21 diamonds, and energy storage is 42 hours.
The watch face comes in either black or white and is made with K9 high strength mineral glass.

“CIGA’s design philosophy is to creatively express the understanding of time through design, to record fleeting years in an original way,” said Jiamin. “The J Series is no exception and we are excited to bring watch-lovers a Zen garden worn on the wrist.”

The watch is the latest in a line of unique, design-driven mechanical watches from an award-winning design team. Thus far, Zhang Jiamin and CIGA Design’s accolades include nine Red Dot awards, three iF Awards, and two German Design Awards.

About CIGA Design
CIGA Design was founded in 2016 by CEO Zhang Jiamin. Mr. Jiamin is a well-known designer with over 30 years of industrial design experience across fields including architecture, aeronautics, and retail products. He has been named one of China’s top 10 outstanding industry designers and is a member of the Industrial Designers Society of America. His love of watches compelled him to launch CIGA. Since, he has won the most Red Dot Design Awards in the Chinese watch field, and in total has won nine Red Dot Awards, three iF Awards, and two German Design Awards.