Cigar Advisor Magazine is a digital publication dedicated to providing cigar enthusiasts with entertaining and informative content. Their January 2014 issue features a piece by Cigar Dojo's Master Sensei on why bourbon is superior to scotch. 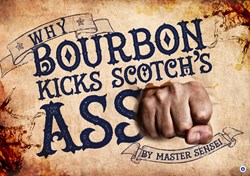 Cigar Advisor Tells Readers Why Bourbon is Better Than Scotch

Many people who enjoy cigars pair their cigars with either bourbon or scotch. As the two most popular drinks to pair with cigars, this piece sheds some light on why one would prefer bourbon over scotch.

The all-new Cigar Advisor is an online cigar magazine that brings a fresh, irreverent, and down-to-earth perspective on all things cigars to thousands of smokers. In addition to educational cigar content and behind-the-scenes cigar industry articles from some of the business’s top names, Cigar Advisor delivers an array of content about a variety of topics of interest to people who enjoy the cigar lifestyle. The magazine also features cigar reviews and ratings submitted by real smokers, and much more. Cigar Advisor just published an article by Cigar Dodjo creator Master Sensei that is an opinion piece detailing why bourbon is better than scotch.

Many people who enjoy cigars pair their cigars with either bourbon or scotch. As the two most popular drinks to pair with cigars, this piece sheds some light on why one would prefer bourbon over scotch. Master Sensei writes “If you're like most folks, you either a) prefer scotch or, b) prefer bourbon Yeah, sure there are other types of whiskeys (or whiskys if you fall into that "a" category), but unless you’re Canadian or Irish, you're really only interested in bourbon or scotch. Most are attracted to scotch right away. They've heard it's a noble drink, one for the gentleman, one that "the most interesting man in the world" probably drinks. Well considering his beer of choice is Dos Equis, I'm not trusting this guy with my drink of choice! Well, in case you haven't gathered the tone of this opening statement, I'm about to tell you why bourbon is better than scotch.”

He continues “There's something grand about bourbon, a prideful feeling that you're somehow a part of its gritty, rough-and-tumble past. When I sip at a glass of barrel proof bourbon, thoughts of Wild West saloons, old time bar fights, and backwoods moonshinin' outlaws fill my head. It's a distinctly American drink, with a bold, in-your-face character, and yet sweet, like your grandma's oatmeal cookies. One thing I find so interesting about straight bourbon is the rigorous regulation it adheres to.”