Cigar Advisor Magazine Publishes Article on the Future of the U.S. Military Arsenal

Cigar Advisor Magazine is a digital publication dedicated to providing entertaining and informative content to cigar enthusiasts. The latest addition to their August 2013 issue is a piece on technological developments in store for the U.S. Military, and how their weapons systems and warfare technology will continue to evolve into the future. 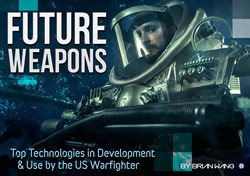 Talking about ‘robotics’ and ‘remote control’ may conjure up visions of toy planes or small drones - but it will be the A-10 tank-buster and bomber planes that are fully controlled by Army Special Ops spotters on the ground.

The all-new Cigar Advisor is an online cigar magazine that brings a fresh, irreverent, and down-to-earth perspective on all things cigars to thousands of smokers. In addition to educational cigar content and behind-the-scenes cigar industry articles from some of the business’s top names, Cigar Advisor delivers an array of content about a variety of topics of interest to people who enjoy the cigar lifestyle. The magazine also features cigar reviews and ratings submitted by real smokers. Cigar Advisor has just published “FutureWeapons: Top Technologies in Development & Use by the US Warfighter” to their August issue.

Brian Wang, Cigar Advisor contributor and “futurist,” has provided the magazine’s readers with a look at several new weapons technologies that have just been introduced to the US warfighter’s arsenal, and more that are coming to the battlefield.

The big transformation for vehicles, according to Brian, is the arrival of combat lasers, robots and remote control. “Talking about ‘robotics’ and ‘remote control’ may conjure up visions of toy planes or small drones - but it will be the A-10 tank-buster and bomber planes that are fully controlled by Army Special Ops spotters on the ground.”

Soldiers will not be left out, says Wang. “They are being equipped with superguns that will offer each warfighter the firepower of a group of squads, and technological aids that boost the accuracy and effectiveness of regular soldiers to the level of snipers. By 2020, there will be the deployment of thousands of exoskeletons that will help soldiers carry 200-pound loads.”

“Science – well, science fiction, anyway - has, for a long time, promised the development and implementation of all sorts of incredible weapon systems and technology,” remarked Pullo. “Brian has provided us with a pretty amazing look at what is actually coming into being.”

Readers can learn more about the technology in Brian’s FutureWeapons piece, by reading the August edition of Cigar Advisor.