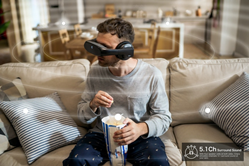 Cinera offers a truly theatrical experience with the most advanced video and audio technology, so movie lovers can enjoy a cinematic film anywhere, anytime.

Cinera is the first true mobile cinema that delivers a real theatrical immersive experience with extraordinary video and sound quality.

After a successful crowdfunding campaign in 2017 that raised over $300,000, the Cinera team collected positive feedback from those backers to improve on the design and features for this latest version. The sequel will feature micro-OLED that packs 3.7 million (2560x1440) pixels into a tiny 0.83-inch screen that transforms into a 120-inch movie screen experience with certified Dolby Digital 5.1 channel surround sound headphones.

“We are in a new era of cinema when visiting a movie theater is not always convenient or safe,” said Peter Lin, founder of Cinera, who previously worked in the digital movie industry, offering technical solutions to movie theatres. “Cinera offers a truly theatrical experience with the most advanced video and audio technology, so movie lovers can enjoy a cinematic film anywhere, anytime.”

Cinera's screen is as large as 1200" from a 20m distance or 66-degree wide horizontally, wider than a standard 54-degree cinema screen and nearly as wide as IMAX’s signature 70-degree screen.

“Part of movies’ magic comes from the theaters’ big screen and vivid sound, that’s why movies don’t always feel right on TV or mobile phones,” added Lin. “We are working hard to bring this cinematic experience beyond movie cinemas.”

While it was designed for movies, Cinera can also be connected with a HDMI cable to play video games, watch sports and TV shows, pilot drones, and use it on a PC. Cinera also features a micro SD card for users to bring their favorite content with them when traveling.

For more information and to pre-order the Cinera Edge at early-bird discounts, visit the crowdfunding page on Kickstarter.

About Cinera - Cinera was founded in 2016 by a group of movie fans who are passionate about movies, technology and elegant product design. The Cinera team successfully launched their first-generation product – a 5K Head Mounted Display in 2017 on Kickstarter and raised over $300K from more than 600 backers on Kickstarter and Indiegogo. In 2020, Cinera announced its sequel – an HMD with the latest micro OLED technology with 2560x1440 pixels in a 0.83-inch area. Cinera Edge also has an embedded Dolby Digital certified 5.1 surround sound headphone.