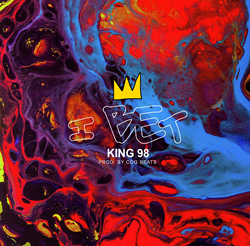 Zimbabwean rapper/singer KING98 releases his new single titled “I Bet.” The is the artist’s second release of 2020, following up on his previous hit single, “Kachiri,” released in July. The song, distributed by Cinq Music via label Impala Music Group drops Friday, November 20. It will be available for purchase on all major digital platforms. The new song can be heard here.

“KING98 once again exhibits his excellent lyrical craftsmanship as he combines rap and Afro Pop on his track,” says Fotemah “Tmah” Mba, Cinq head of A&R, General Market. "KING98 is quickly cementing his place as the next big thing on the Zimbabwean music stage. Afrobeats continues its upward move as an emerging trend in music.”

For “I Bet,” KING98 sings about a man heartbroken by a girl he likes. He puts in a lot of effort, but still ends up disappointed. Audio is produced by Cog Beats from Zimbabwe and mixed & mastered by s2Kizzy from Tanzania. The video is shot and directed by Blaqs, nafuna.africa in Zimbabwe.

KING98 is a Zimbabwean born singer and philanthropist based in South Africa. The young artist is making a mark in the African and International scenes by making African pop/Hip hop his playground. KING98 is also an active philanthropist, currently helping artists and fellow countrymen with food and money during the ongoing Covid-19 pandemic.