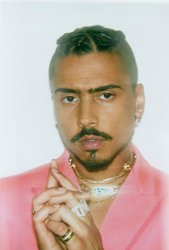 "Aye Yo,” establishes a new global sound while staying true to Quincy's R&B roots. His music has an authentic ability to connect cultures and eliminate barriers.

Cinq Music group has signed singer/actor/director Quincy and has just dropped the artist’s second single of 2020, titled, “Aye-Yo.” The announcement was made by Cinq President/co-founder Barry Daffurn. Terms of the distribution deal were not disclosed. Quincy Brown, better known by his mononym “Quincy”, is recognized as a modern day renaissance visionary artist. He is an accredited actor, cultural content creator, fashion trendsetter, musician and tech entrepreneur. The song can be heard here.

“I think I speak for everyone here at Cinq when I say we’re ecstatic that Quincy is in the house,” says Daffurn. “His new release ‘Aye Yo,' establishes a new global sound while staying true to his R&B roots. His music has an authentic ability to connect cultures and eliminate barriers.”

For his part, Quincy loves Cinq Music’s data-driven release strategies. “To work with a group that understands me on multiple levels is ideal for me,” says Quincy. “I’m such a tech nerd and to see how it all works behind the scenes in an industry that is interconnected by all things digital provides continuous inspiration for me. Cinq empowers the music industry to invest in change and ignite people’s ability to provide ongoing contribution to the music world.”

According to Quincy, his first single in two years came to life while envisioning a playful concept of falling in love with moments. “For me, love is a daily life adventure,” he says. “The idea of ‘Aye-Yo’ is about how to be in love with the moment, however long it may last.” The music video is directed by Nic Stanich (Poo Bear, Chris Brown, Lil Dicky).Quincy’s first single this year, “No Stress,” has garnered over one million views and is featured on Spotify, Tidal and YouTube. It was also announced this week that Quincy will be the first celebrity face for Coach watches. He also recently announced a partnership with iconic pen and leather goods maker Montblanc.