Jerusalem increased ridership by 400% & cut travel time by 47% across its public transit through AI-based and hardware agnostic solution, which reduces urban congestion and carbon emission 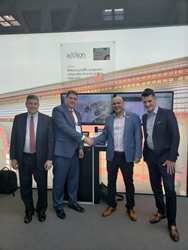 Oran Dror, Co-Founder and CEO of Axilion stated: “We are redefining traffic management in Jerusalem and major cities around the world, through our Co-Sell partnership with Microsoft. Our SaaS platform is empowering cities with AI from the edge compute to the Azure cloud fighting global warming"

The Smart City Expo 2019 in Barcelona is hosting over 700 city delegates from 140 countries on Nov. 19-21. There were 450 projects submitted to the prestigious Smart City Expo 2019 award competition. Jerusalem and Axilion have qualified to the finals in the Mobility category with the deep tech solution performing continuous optimization of the traffic lights network via data-driven insights powered by Microsoft Azure. The innovative platform from Axilion enables planning, designing & deploying of a corridor or a city-wide grid with automated, AI-based suite of tools instead of planning one signal intersection at a time.

The city of Jerusalem is the largest city in Israel with over 1.5M residents in the metropolitan & over 2.5M tourists that visit annually. 75% of motorized transportation is private. Public transit serves 550,000 riders per day. The city has a highly developed transportation infrastructure, including the Jerusalem Light Rail. With over 200 traffic signals along their busy route, passengers faced long wait times, overcrowded trams & unreliable service. Jerusalem’s Transit Authority sought an effective & affordable LRT & bus solution that would shorten overall trip time, allow for more frequent trams/buses, & ultimately serve more of the city’s residents & visitors.

Axilion Smart Mobility aims to revolutionize urban traffic management by transforming traffic signals into a smart, real-time adaptive network. Axilion’s AI edge compute to the Azure cloud platform enables Jerusalem and other cities to reclaim their traffic-congested streets. The powerful algorithm is applied on top of Jerusalem’s current infrastructure through a hardware agnostic abstraction layer that is seamlessly integrated with unified communication and smart optimization. The technology is used to control traffic and perform continuous optimization via AI-based data-driven insights powered by Azure. It enables planning, designing & deploying of a corridor or a city-wide grid with automated, AI-based suite of tools instead of planning one signal intersection at a time.

The deployment of the innovative software solution allowed the city of Jerusalem to:
Cut light rail travel time by 47%,
Reduce No. of trams/buses required by 31%
Enable consistent 6 minutes headway throughout the route
Eliminate platooning & increase of tram frequency by 66%
Quadruple ridership to 200,000 passengers a day at peak times

Jerusalem's advanced light rail & bus system closes the gap between the east & west sides of the city. With diverse ethnic, religious and social class groups on both sides, all are together, riding public transit to get to where they need to go faster with reliable service.

Mr. Itzhak Lary, CEO of Jerusalem Municipality: “Jerusalem’s strategic goal is to make public transit an alternative to private cars by deploying latest innovative technologies. We selected Axilion and Microsoft to maintain and fix green-waves for private vehicles, while improving travel time, schedule adherence and reliability of public transit. This, while reducing emissions in the city center and improving pedestrian safety.”

Mrs. Keren Terner, Director General of the Israel Ministry of Transport: “ The Israeli Ministry of Transport is facilitating, through fast responding and innovative friendly regulation, the collaboration of Israeli start-ups and cities allowing them to safely test, calibrate and deploy innovative technologies. We are taking action and promoting our goals to reduce congestion and improve the quality of life through effective public transportation and highly advanced infrastructure”

Alexander Sixt, Member of the Executive Board at Sixt SE: ”We are supporting Axilion, because we have seen that Axilion’s software truly helps solving a major transportation problem in cities – congestion. Axilion’s state-of-the-art solution allows to significantly advance today’s public transit planning and management. This saves travelers time and ultimately helps to reduce emissions. Most importantly, the solution is live and its success is measurable in cities like Jerusalem.”

Mr. Aharon Aharon, CEO, Israel Innovation Authority said: "The computerization of motor vehicles and their surroundings is causing dramatic changes in the global automotive industry. Reducing congestion and incentivizing people to switch to public transportation is a challenge faced by governments worldwide.
The Israeli Innovation Authority which supports collaborations between academia and the business sector, was pleased to support the IP collaboration between the Technion Institute of Technology and Axilion, resulting in its implementation by the city of Jerusalem, assisting in performing continuous optimization of its traffic flow via the use of an AI-based, data-driven insights. Such technology innovations offer the Israeli tech sector far-reaching opportunities to take significant steps leading towards the creation and protection of a digital transportation environment.

John Porcari, Axilion’s Advisory Board Member & Former Deputy Secretary of the US Department of transportation commented, “Axilion’s solution for public transit in Jerusalem is proven technology that quickly and cost effectively triggers a virtuous cycle of more reliable transit service and increased ridership, with lower capital costs. It may be the single best transit investment that cities and states can make.”

Oran Dror, Co-Founder and CEO of Axilion stated, “We are redefining traffic management with this game-changing technology. Following the success of the deployment of the AI software in the Red line, we now continuing deployment to 100’s of traffic lights in the city for the new light rail lines as well as the new bus rapid transit lines.”

Adv. Eitan Atia, Director General, Forum 15, the union of Israel's major cities: "The key to the future of our cities is shifting the paradigm from significant reliance on the private car to sustainable transport. In order for our cities to sustain the dramatic increase in population and services, it is essential to make our city more efficient and livable, to significantly improve public transport services and to reclaim the streets and public spaces for the use of pedestrians. Axilion's technology serves this purpose by make existing transport utilities more efficient and more serviceable and a result, significantly reducing the time and length spent in transit, both for commuting and recreational needs, thus contributing to cities' resilience."

About Axilion
Axilion enables cities worldwide to reclaim their traffic-congested streets by harnessing advanced AI & deep learning that transforms traffic signals into a dynamic, car-connected and adaptive network. With Axilion, cities maximize their current infrastructure via a universal traffic language that bridges multiple hardware vendors for unified communication and smart optimization, while laying the foundation for monetizing congestion. For more information, visit http://www.axilion.com.