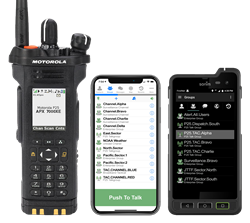 The City of Tacoma’s implementation, which leverages ISSI to integrate ESChat with the City’s P25 network represents the most technologically advanced option for LMR to LTE integration.

Integration of Broadband Push-to-Talk services with traditional public safety radio systems enhances communication capability of first responders. Broadband PTT users enjoy reliable communication with dispatch and radio users while operating in areas of poor coverage or outside the radio coverage area, The selection of ESChat provides the City flexibility to use the wireless carrier(s) that best meet their needs, as ESChat supports Push-to-Talk communication on and between all wireless carriers.

The City of Tacoma’s implementation, which leverages ISSI to integrate ESChat with the City’s P25 network represents the most technologically advanced option for LMR to LTE integration, and is among the first of its kind to be put into commercial service. ESChat recently announced general availability of P25 Phase 2 support over ISSI, and also the availability of dynamic encryption re-keying via the P25 Key Management Facility (KMF). Both of these features are included in the Tacoma contract.

The award follows a 2017 Request for Proposal (RFP), along with post vendor selection validation testing. The delay between selection and award included a scheduled software update to the City’s Motorola P25 Land Mobile Radio (LMR) network, and validation of that update with the ESChat system. Implementation of the ESChat system and P25 ISSI integration to the City’s radio network was completed earlier this month.