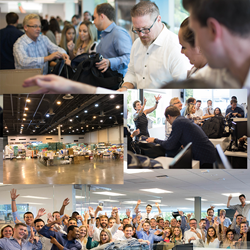 “Even though the sun is shining and the cameras are gone, people are still displaced and it truly is our CIVIC Duty to step up and give back in this time of need.”

CIVIC private money lending headquarters in Redondo Beach, California closed all operations on September 14th to join together and give back to the Houston community. CIVIC’s 100+ employees worked to assemble 1,000 Dignity Backpacks for Hurricane Harvey evacuees. Each backpack included essential supplies including towels, socks, toiletry items and snacks – along with a note of support and encouragement.

The Dignity Backpacks have been delivered to evacuees at the BakerRipley Emergency Shelter at NRG Center in Houston, which is currently serving Texans from more than 100 cities in sixteen languages.

“Each backpack symbolizes the strength to carry on,” said William J. Tessar, CIVIC’s President and CEO. “Even though the sun is shining and the cameras are gone, people are still displaced and it truly is our CIVIC Duty to step up and give back in this time of need.”

BakerRipley is a non-profit organization providing a wide range of community-based programs in Houston and the Texas Gulf Coast. After the flood waters from Harvey recede, they are responsible for assistance with long-term recovery. Angela Blanchard, BakerRipley’s President and CEO, was just awarded the prestigious Heinz Award, and Civic Financial Services is beyond proud to be contributing to their NRG Center shelter operation.

CIVIC FINANCIAL SERVICES is a private money lender, specializing in the financing of non-owner occupied investment properties. CIVIC was created by its parent companies, Wedgewood and HMC Assets LLC, to serve investors who don’t fit traditional lending criteria. Wedgewood and HMC, two of the most respected names in residential real estate, provide CIVIC with unparalleled valuation expertise in the real estate vertical as well as access to low-cost capital. With these resources, CIVIC is able to keep all operations in-house so loans are managed more closely, quickly, and efficiently. For more information on CIVIC private lending, visit http://www.CIVICfs.com or call 877-472-4842.