Denver urban design and landscape architecture firm Civitas impressed San Diego Port Commissioners recently with a tangible vision for San Diego’s busy working waterfront that emphasizes human-scale engagement and open space while honoring the port’s history and effectively addressing transportation issues. With its new concept for a vibrant, pedestrian-friendly and sustainable approach to the mile-long North Embarcadero section of the San Diego waterfront, Civitas has created an achievable vision for the Port’s desired “window to the bay,” a follow-up to the first-phase North Embarcadero linear park and promenade that Civitas completed for the city in 2015. 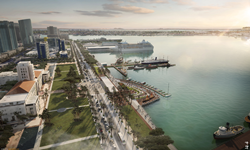 “This is a tremendous plan that will make the San Diego waterfront one of the best waterfronts in the nation,” said Commissioner Marshall Merrifield

In a total reversal of the famous Joni Mitchell song lyrics, a comprehensive vision prepared by Denver design firm Civitas for California’s Port of San Diego includes taking a paved parking lot – some 13 acres of it – and creating a paradise in the form of vibrant, inviting, pedestrian-friendly and sustainable public space along a mile-long stretch of the city’s waterfront known as the North Embarcadero. A second act to Civitas’ successful design and construction of the first phase of the North Embarcadero – a $31 million, 1,000-foot-long linear park and promenade that began the process of energizing the waterfront on its completion in 2015 – the new Civitas study is a key next step toward realizing San Diego’s vision for its working port as a world-class destination that has been in the planning stages for some two decades.

Unlike port redesigns in other cities that remake now defunct industrial sites, “what has always intrigued us about this is that it’s a true working waterfront,” says Civitas Principal Scott Jordan. “Whether arriving in San Diego by boat or air, the port, specifically the North Embarcadero, is a visitor’s first experience.” Indeed, the active bay accommodates leviathan cruise ships disgorging some 250,000 people annually – as many as 10,000 at a time – as well as ongoing commercial fishing activities and two popular museums, the Maritime Museum of San Diego and the USS Midway. The port also serves as the main point of entry for San Diego International Airport, with an annual passenger volume of close to 20 million.

“With this new strategy, we are providing a tangible vision of the ‘window to the bay’ idea the port commissioners have talked about for more than 20 years,” says Jordan. “At the same time, we’ve taken the port’s history” – including its renowned tuna fleet – “and reflected it in the concept of a large terracing pier inspired by the distinctive footprint of the tuna boats with lounge areas that reference fishing nets for relaxing and watching what we think of as the ‘theater of the bay.’”

Conceived to demonstrate an achievable vision with an estimated cost of $200 million that will eventually transform the entire mile-long North Embarcadero area of the busy working port, the most recent Civitas concept was created in conjunction with the larger overall Port Master Plan Update (PMPU). That 300-page long-range planning document provides policies that will govern the development of the entire port district over the next 30 years, affecting all port tidelands – including 34 miles of shoreline, 2,650 acres of land and 1,636 acres of water uses.

“The port asked us to help in creating policies district-wide for land-uses, open space and circulation, and to show what’s possible within those policies,” explains Jordan, who presented the new Civitas vision for the North Embarcadero to the Unified Port Commission Board to rave reviews in February. “We looked at the entire waterfront area holistically, rebalancing open space, potential development, and circulation systems to take advantage of the space available. We maximized the publicly accessible open space while making sure the rest of the urban systems, such as stormwater, mobility, resiliency, parking, universal access and human comfort, still function smoothly,” says Jordan, who adds that it was that deeply comprehensive systemic approach that resonated with commissioners.

On the nuts-and-bolts level, the achievable vision creates memorable and meaningful close-to-the-water experiences that keep visitors coming back, and includes a special veterans’ walk adjacent to the USS Midway Museum on what is currently Navy Pier’s expansive surface parking. Those lost parking spaces would be moved to nearby mobility hubs that, unlike simple parking garages, integrate single-vehicle parking with mass transit, ridesharing, bicycles, scooters and electric vehicle charging, with the flexibility to evolve as the city’s transportation options do. The vision also takes a multi-tiered approach to San Diego’s busy Harbor Drive, narrowing the roadway to provide additional park space on the waterfront side of the road while allowing dedicated lanes for alternative transit and a comfortable pedestrian experience – and introducing a mile-long triple allée of Medjool Date Palms as a heightened arrival sequence for the city.

“This is a tremendous plan that will make the San Diego waterfront one of the best waterfronts in the nation,” said Commissioner Marshall Merrifield at the February Port meeting where Jordan, along with Port staff and representatives from Nexus Planning presented the design. The other board members agreed, with Commissioner Dan Malcolm calling the concept “absolutely stunning” and Commissioner Garry Bonelli dubbing it “a placemaker’s dream.”

“We basically reestablished their vision of their urban waterfront, maintaining it as a working waterfront while creating a vision of what is achievable based on the policies that were created,” says Jordan. Since the February meeting, a draft master plan was issued that is currently out for a 90-day public review.

About Civitas:
Founded in 1984 with the core purpose of “creating healthier cities” and celebrating its 35th anniversary this year, Denver-based Civitas, Inc., is an idea-based practice of urban designers, architects and landscape architects engaged in strategic planning for urban change and project design for built works. Recent honors include both the 2017 International Architecture Award and 2018 American Architecture Award from the Chicago Athenaeum/European Centre; the Canadian Institute of Planners “Great Public Space”; a 2017 IMCL Merit Award; and an Excellence on the Waterfront Award from the nonprofit Waterfront Center. A consultancy and a design studio, Civitas advises on a wide range of strategies for re-imagining urban life and places, working in U.S. cities coast to coast and around the world. For additional information visit civitasinc.com.

A “phase one” Civitas-designed North Embarcadero for the Port of San Diego, completed in 2015, has made that section of the waterfront an engaging destination (photo courtesy of Civitas).