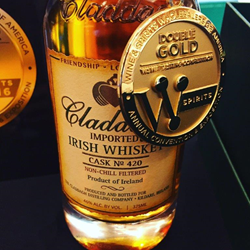 THE LAST 3 FEET Company, LLC is about to enter the worldwide whiskey market with a unique strategy featuring a coordinated social networking program inviting consumers to “buy now” online! Adhering to all federal and state regulations surrounding the distribution of beverage alcohol products, the privately held company will see its Claddagh Imported Irish Whiskey become instantly available to consumers worldwide.

Frank Criscuolo, CFO of THE LAST 3 FEET Company LLC has indicated that although Claddagh has in fact signed traditional United States National distributors, the emergence of websites has redefined the way consumers learn about and shop for spirits worldwide.

“Claddagh will be at the leading edge of this trend as we expect our online sales to rival those of other brands’ traditional retail sales, thanks to an aggressive mix of print, digital and mobile advertising as well as a below the radar “guerilla” marketing plan,” Criscuolo said.

As the company prepares to unleash its marketing plan in the United States, it has opened headquarter offices in the famed Frederic House, Kildare Ireland and has appointed Empire Merchants in New York State and Brescome Barton in Connecticut as its exclusive distributors.