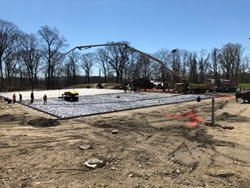 Serving as the general contractor of the project, Classic Turf Company recently designed, constructed and installed post tension concrete tennis courts for Springwood Ely Park in Norwalk, Conn. The expansive project resulted in the William Rippe Tennis Center and provides youth in the area and other community members with state-of-the-art outdoor tennis courts.

Notably, Classic Turf Company and others working on the project moved approximately 2,000 cubic yards of earth as part of the expansion. The dream project became a reality after the city of Norwalk received grant money from the United States Tennis Association. Working in conjunction with Grass Roots Tennis, a local organization that provides youth tennis coaching and programs, the city of Norwalk moved forward with plans invest in the area’s love for tennis and to help promote active lifestyles.

The courts are named after the late William Rippe. Rippe was a prominent supporter and philanthropist of the Norwalk Grassroots Tennis & Education program and was an avid local tennis player.

If you have any questions about the benefits of tennis courts with a post tension concrete base, visit Classic Turf Company’s website at http:// https://www.classicturf.org/ or call toll free at 800-246-7951.