A perennial problem of tomato loss during processing at a legacy South Carolina family farm leads to a creative and sustainable solution: the installation of a new steam generator that resulted in significant savings for the company and scaled up a new profit-making operation using the previously tossed tomatoes. 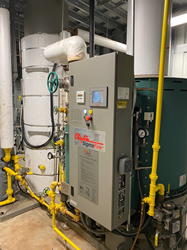 “The [new Clayton] Steam Generator could keep up with the job we needed, no problem. The operation costs are fantastic. The burn usage – propane and everything – have been nominal …And we run it hard, six to seven days a week.” –Ross Taylor, Seaside Farm

About tomato wastage, oft occurring for many growers, Seaside Farm’s (http://www.seasidefarm.com) Mac Sanders on Saint Helena Island, South Carolina, stated, “We found a way to preserve a significant portion of our crop; we hate to waste a beautiful, ripe tomato. Now we turn it into profit. Clayton Industries’ steam generator (http://www.claytonindustries.com) gave us the ability to process up to fifteen 400-gallon batches of flavorful tomatoes per day during peak season. Great fruit we otherwise would have thrown away, we now use for a line of new products.”

Fruit waste has been an annual challenge for each of the five generations of this family of growers.

Then during harvest a few years ago, Sander’s nephew Ross Taylor came up with a solution – they would create the perfect Bloody Mary mix.

Ross specified the right kettle for the job – an Italian-made FMT-brand processing mixer- cooker for tomatoes that could be used to heat 400 gallons in 20 minutes. Mac’s due diligence for the right steam boiler led them to Pack Expo in Chicago. After speaking with several competitors, the Seaside Farm team zeroed in on Will Brozowski, Sales Engineer for Clayton Industries.

Due to the scale of the Seaside operation, it took just six months from meeting at the trade show to completed installation. Will said, “We monitored the installation process throughout to make sure everything was done properly.”

The swift process helped the family get the new venture up and running by the following harvest, processing up to fifteen 400-gallon batches per day during peak season. “The SigmaFire SF50 Steam Generator could keep up with the job we needed, no problem,” said Ross. “The operation costs are fantastic. The burn usage – propane and everything – have been nominal to the degree that we’re not sure how many times we get the tank filled. And we run it hard, six to seven days a week.”

The family launched its new Bloody Mary mix and a variety of other custom products under the Seaside Grown label. Another venture, Frogmore Bottling Company, now offers third party private label product manufacture. “The equipment will soon pay for itself,” said Mac.

ABOUT SEASIDE FARM: In 1901, Gus Sanders situated the East Coast’s first commercial tomato farm on a pretty little peninsula across the sound from Hilton Head Island, South Carolina. Gus discovered that tomatoes grow best in soil by the water’s edge, snuggled in sand and surrounded by water. 115 years later, around 20-million pounds are being distributed from that same Chisolm Field farm by the seaside, and the premium, fresh tomatoes are still the family’s first priority. Five generations of tomato growers and the warm sea have been the perfect blend for cultivating a heritage of quality for over a century. For more information visit http://www.seasidefarm.com.

“Mac and Ross came to our booth [at Pack Expo in Chicago) with a clear idea of what they needed: an extremely safe, small footprint, high-efficiency steam boiler capable of generating the necessary on-demand heat to keep their kettle operating at peak capacity,” said Will Brozowski, Sales Engineer for Clayton Industries. After the convention, Mac sent Will a spec sheet for the FMT equipment and the floor plan for the optimized building. He continued: “Those tomatoes would be already ripe, at their most flavorful, and there would be a lot of volume. The Seaside Farm challenge was to bottle that flavor before it was lost, in the space they had, and to do it cost-effectively.”

They’d have to work with a high volume of ripened fruit in real time during harvest – six to eight hours per day, from the last week of May through the first week of July. With little available land on the island, and to keep start-up costs low, they would have to build a space-efficient facility to suit the purpose.

Clayton’s Will Brozowski specified the SigmaFire SF50 Steam Generator 50BHP. The unit’s compact size and low weight would be ideal for the Seaside Farm building and mesh well with the FMT food processing equipment. It is capable of full steam pressure with a five-minute cold start for use on demand, generates the highest steam quality of any competitive design to prevent contamination, with a fuel efficiency that would help keep operating costs low for this fledgling business concern.

“They don’t have to leave it running overnight, and it’s extremely safe – guaranteed not to have a steam explosion,” said Will.

Seaside Farm had to choose the right steam generator. There was no room to fail.

Though every Clayton customer brings a unique challenge, most deal with much greater volumes and processing complexity than Seaside’s. “Compared with most of Clayton’s customers, our start-up operation was small. But Will and the rest of his team gave us all the timely attention to detail we hoped they would,” said Mac Sanders, a patriarch of the Seaside Farm family.

As a start-up effort, Seaside didn’t have room for a do-over.

“Every customer is different,” said Will, “but they all have to solve a business problem that matters to their success. They did their homework on us – it was our turn to help them find a great solution.”

Will pointed out, “The Clayton family is happy to join the Seaside family in creating business solutions that will help secure the futures of both families.”

Family-held Seaside Farm growers and staff, Saint Helena Island, South CarolinaFounded by Gus Sanders, Seaside Farm and five generations of the Sanders family have been cultivating a heritage of quality for over a century.