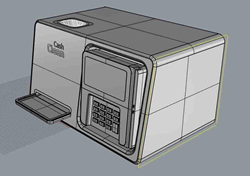 The device has a tray where you place your cash, then, the tray closes and a vacuum-powered set of suction cups lifts and separates each bill, moving them individually over an array of light-emitting diodes which pulsate UVC rays onto the bill itself.

CleanCash is developing a decentralized solution for sanitizing currency at the point-of-sale with its proprietary, patent-pending, reliable, and cost-effective devices. CleanCash hopes that its upcoming products will help businesses and consumers combat their fear of spreading or contracting germs during the current worldwide pandemic.

Founder, Nevin Jenkins, explains some of the details of their upcoming solution: “The device has a tray where you place your cash, then, the tray closes and a vacuum-powered set of suction cups lifts and separates each bill, moving them individually over an array of light-emitting diodes which pulsate UVC rays onto the bill itself. This UVC light energy actually damages the DNA of viruses and other bacteria, effectively sanitizing the bills as they pass through the system. Similarly, coins are separated, sanitized, and delivered back to you or the cashier.”

Credit card terminals present another potential point of transmission, with potentially dozens of consumers touching its screen and buttons every hour. CleanCash’s solution retracts the credit card terminal after each use, where it is similarly sanitized with UVC light energy. This retraction and enclosure are necessary to protect any people from the damaging effects of UV light on human skin and eyes. All UVC light energy-emitting components of the CleanCash solution are completely enclosed and shielded from human exposure.

Though there are ample opportunities for this technology to make an impact during the COVID era, CleanCash believes that their products will be the clear and immediate application to provide a decentralized solution for the sterilization of currency and credit card terminals at the point-of-sale, primarily retail, now and well into the future.

Key to the CleanCash currency sanitization solution is the use of UVC light energy technology, which has been adopted due to several factors:

CleanCash is developing their devices to be ideal for retail businesses that want to take a proactive approach to protect their customers and employees during and after the current global pandemic - without worrying about applying hand sanitizer after every transaction.

CleanCash has plans to provide its system worldwide at the completion of its development and certification of efficacy.

CleanCash is currently conducting a Title III offering on the equity crowdfunding platform StartEngine, where everyday investors can learn more about the technology, and potentially invest in the company at an early stage.

Find out more about the CleanCash solution and the offering at https://www.startengine.com/cleancash

About CleanCash:
Headquartered in Homosassa, FL, CleanCash is developing a solution for sanitizing currency and credit card terminals at the point-of-sale in retail establishments. Their upcoming products will leverage the scientifically proven virus and bacteria-killing power of ultraviolet C (UVC) light energy technology to eliminate the possibility of transmitting germs during retail transactions.