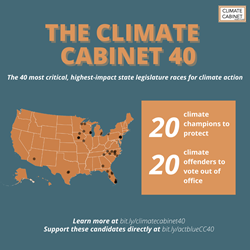 “The number one question prospective donors ask us is where their donation will have the most impact. We created The Climate Cabinet 40 to help anyone identify the races where their contributions can make the biggest difference.”

The announcement is accompanied by the launch of the Climate Cabinet Score Database. This database contains a 100-point score that reflects the voting record on climate and environmental bills for every sitting state legislator in the 10 battleground states.

“The number one question prospective donors ask us is where their donation will have the most impact,” states Caroline Spears, Cabinet Cabinet Action Fund’s Executive Director. “We created The Climate Cabinet 40 to help anyone identify the races where their contributions can make the biggest difference.”

Local Races, Big Impact
While discussions about climate change usually focus on policy decisions made at the national level, much of the decision-making power lies within the state legislatures. It is these governing bodies that make the call on the most critical climate-related decisions, including carbon pollution, illegal air emissions, increasing renewable energy, clean cars, and environmental justice.

These state races afford every citizen a chance to substantively support pro-climate candidates given their smaller scale. For instance, a highly competitive state house race might only cost $75K, compared with larger federal races that often require millions of dollars in contributions. This means that a few hundred $20 donations go further in supporting pro-climate legislators on the state level than it does in federal and national elections.

The Climate Cabinet 40
To determine which races could have the most significant impact, Climate Cabinet Action Fund compiled a list of over 1,500 state legislators in 10 key battleground states. We analyzed data from climate change-related votes in the last legislative sessions to assign every incumbent a Climate Cabinet Score, and overlaid these Scores with each incumbent’s political vulnerability.

About Climate Cabinet Action Fund
The Climate Cabinet Action Fund exists to help candidates run, win, and legislate on the climate crisis. America faces record-breaking hurricanes and fires - but also the opportunity to create millions of jobs in clean energy that solve this existential threat. We have no time to waste - every elected official should have a plan to solve climate change the day they step into office. We help them create one.