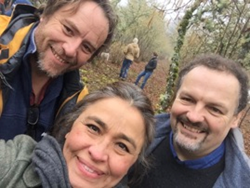 Pictured from left to right are Fabrice and Claudia Caporal of Clos Racines with Dr. Charles Lefevre of New World Truffieres on a truffle foray at the 2019 Oregon Truffle Festival.

The North American truffle community is expanding and poised for success, especially as more dedicated farmers begin to plant orchards, building on the success of the pioneers.

A local family with roots in France has finished planting a 26-acre orchard of 3,600 oak trees inoculated with spores of the highly-prized French black “Perigord” truffle, Tuber melanosporum, from New World Truffieres, Inc., of Eugene, Ore. Clos Racines, the all-organic Lake County orchard owned and managed by French-born Fabrice Caporal, his wife Claudia and their two teen children, is the largest known truffle orchard in California to date.

“Jumping into an uncertain future was a scary yet also exciting decision,” says Fabrice Caporal. “A major reassurance for us was finding the right partners. New World Truffieres and the annual Oregon Truffle Festival have created a community of truffle cultivation enthusiasts that follows the open-source model of development and promotes the free sharing and contribution of information. We felt truly welcomed and knew that, with the support of this dedicated community, we could throw ourselves wholeheartedly into this adventure.”

While California has received a lot of attention for its truffle production recently, the wave of success extends throughout the Pacific Northwest and British Columbia, and in several Mid-Atlantic states. New World Truffieres, founded by Dr. Charles Lefevre, the world-renowned mycologist who also co-founded the Oregon Truffle Festival, has supplied the inoculated seedlings (or “truffle trees”) and technical consultation to nearly all those successful truffle cultivators, including Jackson Family Wines in Calif. New World Truffieres customers comprise 11 of the 12 known commercially productive truffle orchards in the U.S.

“Currently, New World Truffieres has more than twenty customers who have produced their first truffles, and 11 of those are producing enough to sell to chefs and restaurants. It’s very exciting to see our customers succeed and the high-quality of the truffles they are harvesting,” says Lefevre. “The North American truffle community is expanding and poised for success, especially as more dedicated farmers begin to plant orchards, building on the success of the pioneers. We anticipate steady growth of truffle harvests for decades to come.”

That’s good news for several reasons, he explains, “Truffles are not only delicious, but can benefit whole communities with the opportunity to create value-added products made from locally grown truffles, in addition to the benefits for growers and tourism.”

Claudia Caporal agrees with Lefevre about the community-building benefits of truffle farming because her family has experienced them first-hand.

“Clos Racines is not just about planting trees,” she says. “It’s a family project with real life lessons on endurance, the value of being proactive, of thinking things through, and some things you just don’t learn in school. There is a lot of hard work.”

“Our kids have been incredible. They trust us and support our project and have stepped up,” she says. “They see and enjoy the sense of community we’ve created both at home and in the orchard. Our rituals include having friends around the table when the work day is done.”

About New World Truffieres
New World Truffieres, Inc., specializes in truffle cultivation and the controlled inoculation of oak and hazelnut seedlings with a range of culinary truffle species. Dr. Charles Lefevre is the company’s president and founder. Born and raised in Oregon, his abiding interest in the forest environment generally, and in wild edible mushrooms in particular, led to both undergraduate and graduate degrees in biology and mycology. He received his Ph.D. in Forest Mycology at Oregon State University in 2002, conducting research on the host associations of the American Matsutake mushroom. He was the president of the North American Truffling Society for almost 10 years and has been an invited speaker at numerous national and international conferences on the North American truffles. He has published technical articles on the Oregon truffles and cultivation of the celebrated European species. Lefevre and wife Leslie Scott founded the Oregon Truffle Festival in 2006 with the intention to create an educational forum for truffle growers, harvesters, chefs, and foodies. For more information on New World Truffieres, Dr. Lefevre, and truffle cultivation, visit http://www.truffletree.com/ or email info(at)truffletree(dot)com.