New report alerts business travelers on how airport Wi-Fi can put essential cloud-based work apps at risk, and educates flyers on the dangers of connecting to unencrypted, unsecured or improperly configured networks 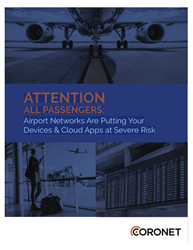 Far too many U.S. airports have sacrificed the security of their Wi-Fi networks for consumer convenience.

The purpose of the report is to inform business travelers of how insecure airport Wi-Fi can inadvertently put the integrity and confidentiality of their essential cloud-based work apps (G-Suite, Dropbox, Office 365, etc.) at risk, and to educate all other flyers on the dangers of connecting to unencrypted, unsecured or improperly configured networks. Currently, Chicago-Midway, Raleigh-Durham and Nashville International lead the pack as the least vulnerable. The complete report, which ranks the 45 busiest airports in the U.S., is available here.

The Methodology Behind Finding America’s Most Cyber Insecure Airports

To identify the airports with the greatest cyber risk, Coronet collected data from more than 250,000 consumer and corporate endpoints that traveled through America’s 45 busiest airports over the course of five months. Coronet then analyzed the data consisting of both device vulnerabilities and Wi-Fi network risks, which was captured from the company’s threat protection applications. Following the completed analysis, the data was combined and standardized to compile an Airport Threat Score. The greater the vulnerability for devices and networks, the higher the score assigned. Based on the analysis, Coronet classifies any score above 6.5 as unacceptable exposure.

“Far too many U.S. airports have sacrificed the security of their Wi-Fi networks for consumer convenience,” said Dror Liwer, Coronet’s founder and CISO. “As a result, business travelers in particular put not just their devices, but their company’s entire digital infrastructure at risk every time they connect to Wi-Fi that is unencrypted, unsecured or improperly configured. Until such time when airports take responsibility and improve their cybersecurity posture, the accountability is on each individual flyer to be aware of the risks and take the appropriate steps to minimize the danger.”

Limit Cyber Risk at Airports with Coronet’s SecureCloud – It’s Free, Forever
Coronet’s free SecureCloud platform empowers business travelers with enterprise-grade cloud security, enabling them to prevent the inherent risks of airport Wi-Fi and subsequent threats from impacting their companies cloud apps and devices. With Coronet, all travelers can safely access any cloud service, through any device and connect to any network and seamlessly be secured. To sign up and get started with SecureCloud, visit http://www.coro.net/signup.

Coronet is an award-winning, privately-held leader in cloud security. Based in Tel Aviv, Coronet brings enterprise grade security to any size organizations by providing a fully hosted security as a service platform, eliminating the need for integration or customization, containers or proxies, and other tools that limit users, impact their experience, or inhibit productivity. Requiring zero operator involvement, Coronet’s patented SecureCloud Platform continuously identifies risks and threats to ensure that only authorized users, using safe devices, connecting through uncompromised networks to cloud applications can access corporate data. The platform automatically controls applications users can use, activities users can perform, and data they can access and share. Protecting over one million users worldwide, Coronet has offices in New York, North Carolina and Frankfurt, Germany. Interested parties can visit http://www.coro.net to obtain more information.