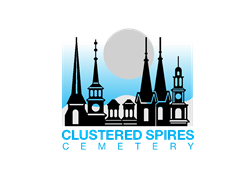 Kent Construction Group of Frederick County replaced the damaged Terracotta roof tiles as part of an ongoing program to maintain the historical significance of this beautiful and relevant part of the City of Frederick.

In late 2008, a few friends, patrons, and community volunteers began a conservation program to renew and refresh the cemetery which originally opened in 1930 as Frederick Memorial Park. When the cemetery was restructured as a non-profit cemetery, the name was finally changed to its current name, Clustered Spires Cemetery.

Original cemetery designs are always retained, restored when possible, and blended into new designs when appropriate.

As part of the 2008 restoration, the mausoleum was known as “Sunrise Mausoleum”, chosen to reflect the traditional Easter Sunrise Services held at that spot each year. Also, new lighting was restored to the Sunrise Mausoleum in late 2010, by Horn Electric of Frederick, MD

In addition to the Mausoleums restoration, more than 21,000 square feet of gravel roads have been repaved, including the mausoleum concrete stairway landing. Removal of shrubs and trees make way for the newly designed landscape around the Mausoleum property.

The purpose of this extensive restoration was to bring it back to its beautiful former condition without disrupting its historical significance.

Restoration hopes to draw attention to this treasured hilltop memorial park which offers a spectacular view of Frederick City and the famed “clustered spires” for which the city is known. It is widely believed that the American flag which proudly flies on a 50 foot mast near the top of the cemetery property at Linden Avenue, stands at the highest point for an American flag in Frederick City.

Many prominent Frederick families have chosen to be entombed in this lovely Sunrise Mausoleum such as Delaplaine, Crutchley, Smelser, Wachter and many others. We invite you to visit us to check out other names you might recognize.