Cannabiz Media has released its first state research report, Tracking the Connecticut Licensed Marijuana Economy, 2015 Edition, which provides detailed information on the businesses, professionals, and products that are shaping the marijuana economy. 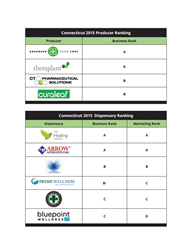 Cannabiz Media has released its first state research report, Tracking the Connecticut Licensed Marijuana Economy, 2015 Edition, which provides detailed information on the businesses, professionals, and products that are shaping the marijuana economy. The first report is free to download at Cannabiz.Media.

The Cannabiz Media team researched all licensed producers, dispensaries, testing labs, backers, executives, employees, and products in the Connecticut licensed marijuana economy using the Cannabiz Database, which includes detailed information on over 10,000 licenses across the country.

“The Cannabiz Media team is developing the most comprehensive database related to marijuana licensing and the marijuana economy in the United States,” explains Larry Schwartz, Co-founder and President of Cannabiz Media. “The marijuana industry is set for massive growth, and every aspect of the industry is tied directly to licensing. This is the information that journalists, researchers, regulators, and business people need to make decisions and do their jobs every day. The Cannabiz Database is the only resource that enables them to quickly and easily access, analyze, and share reliable and up-to-date information for every state.”

“The goal of our research was to find how licensed businesses, professionals, and products are related in Connecticut,” explains Ed Keating, Co-founder and Vice President of Government Relations. “We evaluated all of the data in the Cannabiz Database and applied rankings for each producer and dispensary in the state. For dispensaries, we also developed a marketing rank, since this is such a critical success factor for them.”

“After collecting and analyzing all of the data for the Connecticut marijuana licensing industry, we were able to identify five key findings that stakeholders, including journalists, regulators, researchers, and investors, will find highly insightful,” says Keating.

Cannabiz Media is developing reports for other states in the marijuana economy in the coming months and after publication, all reports will be updated with the most current information on an ongoing basis. While the Connecticut report is available for free, future state reports and access to the full Cannabiz Database will be available through subscription in 2016. Accredited journalists can access the Cannabiz Database for free at any time by emailing press@cannabiz.media to request login credentials.

Cannabiz Media has acquired data on thousands of licenses across the country to develop the Cannabiz Database, the most comprehensive U.S. marijuana licensing economy database available. Led by a team of content and data experts with domain expertise in regulatory and corporate information, Cannabiz Media helps journalists, regulators, researchers, business people, investors understand and confidently operate in the evolving marijuana marketplace in the United States. Marijuana industry stakeholders use the Cannabiz Database and state reports to easily access and make sense of the industry so they can make informed business, regulatory, and reporting decisions. For more information, visit http://www.cannabiz.media.