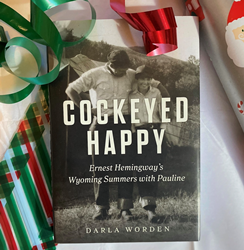 The new “Cockeyed Happy,” on Ernest Hemingway’s Wyoming days, is one of four recent titles recommended for holiday gifting to Hemingway fans.

“Wyoming was the blank page just waiting for him to put his mark on it," Darla Worden writes of Ernest Hemingway in her new book “Cockeyed Happy.”

Considered one of America’s greatest writers, Ernest Hemingway also led a life filled with drama and adventure that has often inspired as much interest as his now classic works of American literature. Just in time for holiday giving – and on the heels of Ken Burns and Lynn Novick’s 2021 Ernest Hemingway documentary series for PBS that further piqued interest in the great author’s escapades – three recent books delve into his special relationship with the American West and how he and his writing were shaped by his ties to the rugged land, while a fourth goes beyond the U.S. to explore favorite Hemingway spots around the globe.

“Wyoming was the blank page just waiting for him to put his mark on it," Darla Worden writes of Ernest Hemingway in her new book “Cockeyed Happy: Ernest Hemingway's Wyoming Summers with Pauline” (Chicago Review Press; $28.99). In a book Publisher’s Weekly calls “an immersive debut,” Worden, a Wyoming native, has chronicled the little-known details of Hemingway’s time in her home state – including his first introduction to the American West and his summer escapes there with his second wife, former Paris Vogue editor Pauline Pfeiffer, between 1928 and 1939, riding, fishing, hunting and always writing, completing the first draft of "A Farewell to Arms," along with putting the final touches on many works including "Death in the Afternoon" in the cool mountain air.

“Cockeyed Happy” has received a variety of media acclaim and Worden presents her fresh research with a page-turning approach that reads like a novel, encompassing a host of Wild West experiences from bear hunting to car crashes, serene days spent midstream in waders to bootleg liquor-fueled dude ranch parties. “So many things about Hemingway, you just couldn't make up,” says Worden. “I didn’t need to write a work of fiction; he's the perfect character, because he's so complex.”

An inveterate reader of all things Hemingway, Worden offers a holiday roundup of recently published books that, along with “Cockeyed Happy,” expand on his sense of place and are perfect for gift-giving to book lovers and Hemingway fans alike.

Hemingway’s time in the West extended to Sun Valley when he and third Hemingway spouse, Martha Gellhorn, moved to the Idaho resort town in 1939. On a cold "windless, blue sky day" in the fall of that year on a blue-ribbon trout stream south of Sun Valley, Ernest Hemingway flushed three mallards and got each duck with three pulls. "You could have given him a million dollars and he wouldn't have been any happier,” attests his local hunting guide in “Hemingway’s Sun Valley: Local Stories behind his Code, Characters and Crisis” by Sun Valley author Phil Huss (The History Press; $23.99). Huss sought out previously unpublished stories about Hemingway's Idaho adventures to share, tying those and passages from the author’s famous work to principles of Hemingway’s "Heroic Code."

Following in Ernest Hemingway’s footsteps from his childhood home in Oak Park, Illinois, through U.S. places he called home as well as Italy, France, Africa, Spain and more, Curtis L. DeBerg’s lavish new book “Traveling the World with Hemingway: The great writer made places from Paris to Havana as indelible as his characters” (Wild River Press; $75) is packed with rich photos of places where Hemingway lived for a time, mingled with sepia historical photos. DeBerg, himself a world traveler, has sought out the destinations that Hemingway has made as vivid and memorable as he did his fictional characters. Filled with the romance of a great writer's favorite places, this book can also provide itinerary inspiration for the literate traveler.

To make holiday book-shopping easier, Worden is offering a “Cockeyed Happy” holiday special. For shoppers who purchase “Cockeyed Happy: Ernest Hemingway’s Wyoming Summers with Pauline” from author Darla Worden by December 8, 2021, she will autograph, include a “Cockeyed Happy” bookmark, and ship the book for $37.64 (includes $8.95 shipping) with optional gift wrap for $2. For more information or to order, visit Worden’s website at http://www.darlaworden.com.

About Darla Worden:
Wyoming native Darla Worden lives in Denver, Colorado, where she is editor in chief of Mountain Living and Colorado Homes & Lifestyles magazines. Worden also is founder and director of the Left Bank Writers Retreat in Paris and a journalist known for articles about art, architecture, travel and the West. Her quest to uncover the story of Hemingway’s time in Wyoming was first sparked when she learned the author had spent a summer in her hometown of Sheridan and nearby Big Horn, Wyoming. For additional information about "Cockeyed Happy" and related book events, visit darlaworden.com or follow @darlaworden on Instagram.

A fan of books by and about Ernest Hemingway, author Darla Worden, shown here on her Jackson Hole book tour for “Cockeyed Happy,” recommends four Hemingway titles for holiday giving.

Books by Chris Warren and Phil Huss go in-depth about Hemingway’s time in two distinct regions of the American West.

A good gift selection for travel-lovers, Curtis L. DeBerg’s new coffee-table book follows Hemingway to places around the globe where he lived for a time and that influenced his writing.