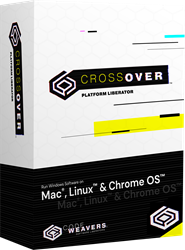 “Our CrossOver Chrome OS product shares about 99% of its DNA with our CrossOver Linux product,” Jeremy White, founder of CodeWeavers explains.

CodeWeavers®, Inc., developer of CrossOver™ — a unique approach to cross-platform compatibility for macOS® and Linux — announced the release of the much anticipated CrossOver 20, for macOS, Linux and for the first time ever Chrome OS®. CrossOver allows these platforms to run thousands of Windows® applications as if they were operating on their native platform without a Windows operating system or buying a Windows license. The result is faster response times and superior user experiences.

CrossOver Chrome OS uses Google’s Linux container support enabling a Chromebook to run various Windows applications as if they were native and without requiring a Windows operating system. Not only does it integrate directly with the Chrome OS shelf, it also works in offline mode as well as it does in online mode.

“Our CrossOver Chrome OS product shares about 99% of its DNA with our CrossOver Linux product,” Jeremy White, founder of CodeWeavers explains. “Our initial Chrome OS product was built on Android, because Google provided support for Android applications. However, since then, Google has provided support for Linux applications. We feel that providing CrossOver using this route provides a superior user experience.”

Across all platforms, CrossOver 20 includes Wine 5.0 (with over 3,400 improvements) and the ability to rate applications within the CrossOver UI. The macOS version offers support for Big Sur (macOS 11), including Apple Silicon. The macOS version also includes major improvements to support for games, including 32 bit games that are no longer available for the Mac, DirectX11 and 12 games and the Steam client. The Linux version undertook a thorough review of Linux distribution support, with an effort to integrate cleanly with all modern distributions and support for CrossOver to upgrade itself.

Purchase Options for CrossOver 20: Packages Start at Only $39.95

CrossOver works with all kinds of Windows software — productivity apps, utility programs and PC games — all with one application. Take the free trial for a spin. It lasts for 14 days, does not require a credit card and is naturally gluten free. Purchase CrossOver in one of three packages starting at $39.95 USD (CrossOver One, CrossOver Pro and CrossOver Life) and get Kama Muta for supporting the Wine Project.

About CodeWeavers
We're rebels. We're misfits. But mostly, we're software liberators. And we're very, very good at what we do. We have to be. Lots of developers work with open source, but only a tiny fraction of those are good enough to get software that was designed for one platform to work on another one. We invented CrossOver software - a unique approach to cross-platform compatibility that does not require dual-boot or another OS license. We launched PortJump to help app and game developers broaden their market beyond Windows® users. And we launched ExecMode to help Enterprise organizations solve really ugly technical challenges. For more information, visit http://www.CodeWeavers.com.