The Boulder French Press is engineered to withstand any adventure 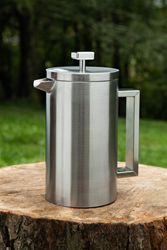 The Boulder Camping French Press is an ultra-durable 10-cup coffee press designed to withstand the great outdoors while making the best coffee possible.

Owned and operated by veterans, COLETTI’s products are engineered for the outdoors.

“The Boulder solves all the problems of your typical coffee press,” said founder Josh Gilliam. “As avid outdoorsmen, our team noticed that most on the market break easily, lose heat, used plastic, and are too small, leaving campers making one or two cups at a time. Our press is strong, retains heat, and makes 10 cups - leaving no camper under-caffeinated.”

The Boulder is vacuum-insulated to keep coffee hot for over four hours. It has thick steel walls, separated by 2mm of vacuum-insulated space to provide superior insulation. Plus, an air-tight silicone gasket seals the press to retain heat for those late-rising campers. The patent-pending lid makes the press completely spill-proof.

This 42 oz press contains no aluminum or plastic, making it safe for the environment and humans alike. It’s built to last a lifetime and backed by a Lifetime Replacement Guarantee.

The rugged Boulder is made of AISI 304 steel using the same 14-gauge industry-standard material used for building construction. It has a versatile style available in gunmetal black or brushed steel. So while it’s designed for camping, it will also add class to a kitchen countertop.

The plungers on most French presses stop short of the bottom, leaving the water and coffee grounds to continue interacting through the porous filter after brewing is complete. The Boulder’s plunger is designed to press the water out of the grounds to inhibit further extraction. The result is coffee that’s good to the last drop, doesn’t get bitter, and has no grainy dregs mixed in.

COLETTI was founded in 2016 by Army veteran Josh Gilliam, a former infantry officer who led Soldiers in Afghanistan and Iraq with the First Ranger Battalion and the 82nd Airborne. Since launching, COLETTI has become known for its range of durable coffee percolators and accessories engineered for the outdoors.

“We’re a team of coffee lovers and camping enthusiasts. Our gear is designed to withstand the impacts of your next adventure. Everything we design meets the rigorous standards demanded by our team of combat veterans,” said Gilliam. “We’re excited to bring The Boulder to campers everywhere.”

The COLETTI Boulder is now available on Kickstarter. The company plans on delivering to Super Early Birds in April and other backers in July. For more information or to interview COLETTI’s founder or the design team, please contact public relations agent Jackson Wightman.

COLETTI’s founding owner, Pastor Josh Gilliam, was commissioned as an Infantry officer in 2000 from West Point. Soon after, he was leading Soldiers in combat with both the 75th Ranger Regiment and the 82nd Airborne Division. During that time he became burdened by the lack of religious freedom and misunderstandings about Christianity. Josh resolved to – one day – open a door for the good news in that region.

In 2016 COLETTI was established with the purpose of generating funds to provide access to Christianity in places where it is feared and misunderstood – to champion the freedoms of press, speech, and religion that are so connected to human flourishing. Ten percent of gross income is donated to this mission. Since that time other army officers and military veterans have rallied to the COLETTI team.

Since its launch, COLETTI has become known for its line of ultra-durable and high-quality coffee percolators, cups, and now French Press, designed for the great outdoors. COLETTI’s products are sold at retailers including at Amazon, Walmart, and on the company’s website.