The educational series discusses the importance of early detection and treatment. 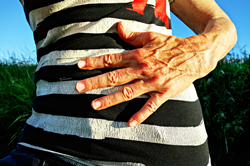 The upcoming episode of “Behind The Scenes” will further explain these treatments for colon cancer and the process taken to diagnose individuals.

Multiple Emmy Award-winning actor Laurence Fishburne is the host of the educational show “Behind The Scenes” with Laurence Fishburne. The TV program informs its viewing audience about a wide array of subjects impacting people all across the globe. Coming to the show is an episode featuring the medical field. The show will interview industry professionals as they discuss the diagnosis process and treatment of colon cancer.

In the U.S., colon cancer is the third most commonly diagnosed cancer and the second leading cause of cancer death. The lifetime possibility of developing the disease is 4.5% but varies depending on an individual’s family history, lifestyle, etc. Detecting colon cancer at an early stage provides the most considerable chance for a cure.

Proper diagnosis of colon cancer begins as soon as an individual indicates signs and symptoms. Doctors use a scope to examine the inside of the colon as well as blood tests. Once the exact stage of the cancer is determined, a medical professional can administer treatments. Early-stage colon cancer may include minimally invasive surgery, removing polyps, and endoscopic mucosal resection. More advanced colon cancer may involve lymph node removal, a partial colectomy, or surgery to create a way for waste to exit the body as treatment. Further advanced colon cancer treatment could include radiation therapy, chemotherapy, or targeted drug therapy.

Cancer affects a significant number of people all over the world. Not only are those diagnosed with the diseased impacted, but also are the surrounding loved ones. The upcoming episode of “Behind The Scenes” will further explain these treatments for colon cancer and the process taken to diagnose individuals.

“Behind The Scenes” with Laurence Fishburne is a carefully reviewed educational television program. The show has received several awards for its efforts in public TV.