The influence of America’s Founding Fathers isn’t only felt in the nation’s capital. Some of their culinary practices and methods of healing are experiencing a revolutionary revival in Colonial Williamsburg’s Revolutionary City and resort. 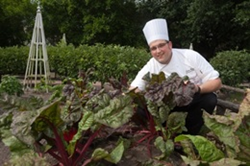 The influence of America’s Founding Fathers isn’t only felt in the nation’s capital. Some of their culinary practices and methods of healing are experiencing a revolutionary revival in Colonial Williamsburg’s Revolutionary City and resort.

Foodies and anyone else who appreciates a great meal will want to sample the recently opened Taste Studio, an exclusive program that begins with a guided tour of the Revolutionary City’s gardens and moves into the newly designed demonstration kitchen, where chefs turn the herbs and vegetables harvested on the tour into mouth-watering dishes.

“Thomas Jefferson walked along these very gardens,” says Chef Justin Addison of The Lodge at Colonial Williamsburg’s Traditions restaurant. “The sustainable farming movement goes back to the early days of our country.” It’s a recipe that certainly fits the mission of America’s leading center for history and citizenship, “that the future may learn from the past.”

The Spa of Colonial Williamsburg also takes a page from the past, offering healing treatments inspired by proven remedies that relieve the stress and strain of 21st-century life.

A detoxifying herbal wrap and hot stone massage relies on the same principles that were used to aid healing in the 17th century. An orange and ginger scrub and massage updates an 18th-century method of improving overall well-being: Ginger has long been used to aid digestion, while oranges are an excellent source of vitamins. Other treatments that build on traditional healing practices also are available, tailored to the individual or a couple.

After these encounters with America’s past, guests can have a very modern experience at the award-winning Golden Horseshoe Golf Club. Along with two nights’ accommodations and a round of golf on either the Gold or Green course, golfers are entitled to complimentary rental of PING G30 clubs—loaded with the latest in technological innovation—along with unlimited range balls, an engraved Golden Horseshoe bag tag, commemorative golf pouch and ball marker with the club’s 50th Anniversary logo, and a yardage book. The package starts at $169 per person per night, double occupancy, and also includes a length-of-stay pass to the Revolutionary City, complimentary evening programs, golf and tennis clinics, and more.

For more information or to book the Golden Horseshoe Hotel Package, call (855) 296-6627 or visit http://www.colonialwilliamsburg.com

There is one local tradition that never grows old: Revenue from rounds at Golden Horseshoe’s three courses supports The Colonial Williamsburg Foundation, keeping this vital piece of American history alive and thriving.

The Colonial Williamsburg Foundation preserves, restores and operates Virginia’s 18th-century capital of Williamsburg, Va., as a 21st-century center for history and citizenship. Innovative and interactive experiences, such as the street theatre Revolutionary City® and the RevQuest: Save the Revolution! series of technology-assisted alternate reality games, highlight the relevance of the American Revolution to contemporary life and the importance of an informed, active citizenry. The Colonial Williamsburg experience includes more than 400 restored or reconstructed original buildings, renowned museums of decorative arts and folk art, extensive educational outreach programs for students and teachers, lodging, culinary options from historic taverns to casual or elegant dining, the Golden Horseshoe Golf Club featuring 45 holes designed by Robert Trent Jones and his son Rees Jones, a full-service spa and fitness center, pools, retail stores and gardens. Philanthropic support and revenue from admissions, products and hospitality operations sustain Colonial Williamsburg’s educational programs and preservation initiatives.