Under the new entity, e-End will continue to provide R2 Certified recycling and destruction of data. 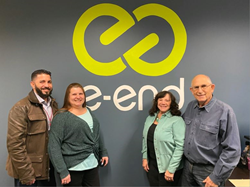 “e-End not only met but exceeded my requirements in all areas.” Nidal Allis, President, Techno Rescue

After 14 years serving the greater Denver area, Colorado based Techno Rescue is now expanding their electronic recycling and data destruction services to include the East Coast region. Techno Rescue’s President, Nidal Allis, recognizing the demand for his important certified services, sought out an East Coast based company that met his stringent requirements. Allis explained “The ideal company would not only have to be certified in recycling and data destruction, but needed to have a strong client base, and most importantly, operate under the same type of business culture I have built with my company, a culture that seeks to provide the highest level of customer service.” Allis vetted a number of companies until he found the right fit with Maryland based e-End. “e-End not only met but exceeded my requirements in all areas.” he added.

Through the acquisition, e-End, located in Frederick Maryland, will become a division of Techno Rescue. Under the new entity, e-End will continue to provide R2 Certified recycling and destruction of data containing media under their NAID AAA certification. They will also maintain their ISO 45001 and ISO 14001 certifications. Allis noted that e-End is able to perform unique services for government and various law enforcement agencies. “Another major factor in my decision to go with e-End was their capability to destroy weapons, tactical items such as Kevlar helmets and vests, and a wide variety of ITAR controlled devices. This greatly expands our market potential.” Allis stated.

With Techno Rescue’s and e-End’s locations, bolstered by their alliance with strategic partners, they will be capable of providing electronic recycling, data destruction, ITAD, ITAR services nationally. Together, they will have the joined capabilities of processing in excess of 5 million pounds of material annually. In addition, they have the ability to sanitize and destroy several hundred thousand data-containing media items annually.

Arleen and Steve Chafitz, owners of e-End, endorsed the acquisition noting that they had been approached by several companies in the past regarding an acquisition. “It was very important for us to know we were turning over our company, one we had built focusing on providing the highest level of service, to someone who possessed the same business culture and who understood the importance of treating their employees and clients with the same high standards we have always insisted on,” explained Arleen Chafitz.

About Techno Rescue - Techno Rescue is a Veteran-Owned Colorado company that holds numerous certifications related to the recycling of end-of-life electronics, has health and safety and environmental certifications and is recognized as a leading service provider in the greater Denver Area. In addition to their e-End division serving the East Coast, Techno Rescue has strategic partners that permit it to serve clients throughout the continental United States.