Author and father Christian Carl introduces Land of Lots, a 13-part book series that kids of all ages will love 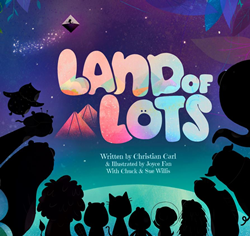 Land of Lots By Christian Carl

“There are universal characteristics among children, which I wanted to illustrate throughout each character the readers meet. I wanted to build a world filled with wonder and new friends for all families to enjoy as each story will be timeless.”

Every child has an imagination, and Christian Carl offers a new place for readers to escape in his new book series, Land of Lots. The series follows Lovelot, a young girl wandering through space who stumbles on a land in a strange and magical place that introduces her to new friends.

The series begins with Lovelot exploring this new land called Land of Lots, where she meets and gets to know an adorable community of animals called Oomlots. Throughout the series, children will meet each Oomlot who embody different characteristics that make up this enchanting place and will see little pieces of themselves with every new friend they meet. Each book is dedicated to a different Oomlot and activities they love to do. From a fish named Gill, who loves to talk to a cat named Paige, who loves to read, Lovelot devises plans for each furry friend to help them understand essential life lessons.

The Land of Lots book series focuses on different characteristics that are seen among every child. Readers will be able to use their imagination while learning new things along the way. As parents read this series with their little ones, they will see their child in every Oomlot they meet.

“After having three kids who grew up in different generations, I realized they all had similar traits,” said Carl. “There are universal characteristics among children, which I wanted to illustrate throughout each character the readers meet. I wanted to build a world filled with wonder and new friends for all families to enjoy as each story will be timeless.”

From the importance of friendship to understanding one another, parents will see how timeless this book series is for their children and children of the future. By the end of the series, readers will have 13 new friends and will enjoy learning about their stories and what makes up who they are. The Land of Lots series is illustrated beautifully for every family to enjoy.

About the author
Christian Carl has helped raise three kids ages 27, 17 and 6. Though the world has changed a lot over nearly three decades of parenthood – some things stay the same. Kids are reckless, impatient, moody, imaginative, loving and need two things from their parents – patience and a plan. In Carl’s newly released book series, Land of Lots, he allows young readers to escape to a faraway planet where they will meet 13 new friends and will be able to relate to all of their stories. Not only is the author an experienced parent, but he has spent numerous years as a Creative Director working among various marketing campaigns bringing different worlds to life. Much like his professional work, in his 13-book series, he creatively builds a world of everything he has loved and learned for any parent or child to adore. To learn more, please visit https://www.thelandoflots.com/.