Columbus Citizens Foundation to award a $25,000 Annual Scholarship to Italian American Students Who Exemplify the Values and Determination of Dr. Fauci, Director of the National Institute of Allergy and Infectious Diseases 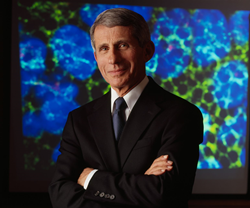 Dr. Anthony S. Fauci will be honored by a new medical scholarship made possible by Columbus Citizens Foundation.

Through this perpetual scholarship program, our Foundation will continually pay tribute to this great Italian-American by providing needed assistance to the next generations of public health and medical trailblazers emerging from our community.

Columbus Citizens Foundation (CCF) is proud to announce a new scholarship to support Italian Americans with great academic prowess seeking financial aid at the graduate level in medical and public health fields of study. The scholarship will be awarded annually, recipients will be chosen by a qualified standing committee and the scholarship is to be awarded in the name of Dr. Anthony S. Fauci.

Dr. Fauci will be an honored guest at the Foundation’s 2020 Virtual Gala on Saturday, October 10, and will be featured in the Columbus Day special that will air on WABC-7, Monday, October 12 at 12:30 PM ET. Dr. Fauci will also be honored formally with the Columbus Citizens Foundation’s Humanitarian Award in October 2021, when an in-person Gala event can be held. Tickets to CCF’s 2020 Virtual Gala can be purchased at http://www.columbuscitizensfd.org/galatickets.

CCF President, Marian Pardo, said of the announcement: “During his entire career Dr. Fauci has pursued the public good through sound science, rigorously applied and clearly explained. COVID-19 has again brought to the Nation his voice of calm in a sea of uncertainty. Through this perpetual scholarship program, our Foundation will continually pay tribute to this great Italian-American by providing needed assistance to the next generations of public health and medical trailblazers emerging from our community.”

Dr. Fauci was born in New York City. He grew up in the Bensonhurst section of Brooklyn, where his family owned a pharmacy that they lived above. A young Anthony Fauci delivered prescriptions to the local, largely Italian American, neighborhood.

Dr. Fauci attended Regis High School in Manhattan's Upper East Side and following his graduation he enrolled at the College of the Holy Cross, graduating in 1962 with a Bachelor of Arts degree in classics with a pre-med track. Dr. Fauci then attended medical school at Cornell University Medical College where he graduated first in his class with a Doctor of Medicine in 1966. He completed an internship and residency in internal medicine at the New York Hospital-Cornell Medical Center, now known as New York Presbyterian/Weill Cornell Medicine.

Dr. Fauci has been a key advisor to six Presidents and their administrations on global AIDS issues, and on initiatives to bolster medical and public health preparedness against emerging infectious disease threats such as pandemic influenza. As an HIV/AIDS researcher, he has been involved in the scientific effort since AIDS was recognized in 1981, conducting pivotal studies that underpin the current understanding of the disease and efforts to develop therapies and tools of prevention. Dr. Fauci was one of the principal architects of the President’s Emergency Plan for AIDS Relief (PEPFAR), which has helped save millions of lives throughout the developing world. He is best known currently as a key advisor on the COVID-19 pandemic.

Dr. Fauci was previously named as a Columbus Celebration Honoree in 1988, for his ground-breaking work on curbing the AIDS epidemic worldwide.

At inception, the Fauci Scholarship is seeking to raise one million dollars in endowment that will be distributed as $25,000 annual amounts to a single recipient each year. Executive Director of CCF, Lisa Ackerman, noted: “We are thrilled to be introducing this new scholarship to our existing program. The qualities of empathy, understanding and perseverance that Dr. Fauci has exemplified throughout his career, will all be prerequisites for potential candidates. We are fortunate to be starting our fundraising with significant leadership donations, including a gift of $100,000 from the Francesco and Mary Giambelli Foundation and a $25,000 grant from a Board member.”

Angelo Vivolo is the President of the Francesco and Mary Giambelli Foundation, and he had this to say about that group’s leadership role: “The Giambelli Foundation carries on the legacy of philanthropic giving that Francesco and Mary Giambelli established during their lifetimes – and we cannot think of a greater way to curb future pandemics than to encourage the ‘future Faucis’ to shine. We are proud to be the first lead sponsor in what will be a very special scholarship for Columbus Citizens Foundation.”

To learn more, and to contribute to the Dr. Anthony S. Fauci Scholarship, please visit: http://www.columbuscitizensfd.org/fauci.

MORE ABOUT DR. ANTHONY S. FAUCI
Anthony S. Fauci, M.D. is a physician-scientist who directs the National Institute of Allergy and Infectious Diseases (NIAID) at the National Institutes of Health in Bethesda, Maryland. He oversees an extensive research program on infectious diseases such as HIV/AIDS, influenza, tuberculosis, Ebola and Zika, as well as diseases of the immune system. Dr. Fauci also serves as one of the key advisors to the White House and Department of Health and Human Services on global infectious disease issues. He was one of the principal architects of the President’s Emergency Plan for AIDS Relief (PEPFAR), a program that has saved millions of lives throughout the developing world. Dr. Fauci also is the long-time chief of the NIAID Laboratory of Immunoregulation where he has made numerous important discoveries related to HIV/AIDS and is one of the most-cited scientists in the field. He is a member of the US National Academy of Sciences and the US National Academy of Medicine and has received numerous prestigious awards for his scientific and global health accomplishments, including the National Medal of Science, the Robert Koch Medal, the Mary Woodard Lasker Award for Public Service, and the Presidential Medal of Freedom. He has been awarded 45 honorary doctoral degrees and is the author, coauthor, or editor of more than 1,300 scientific publications, including several major textbooks.