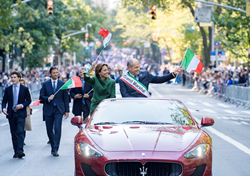 The 90-minute television celebration will air on ABC Channel 7 as an exclusive special that honors the Italian and Italian American journey through historical vignettes that will showcase a proud heritage and rich cultural traditions. Featuring in-depth interviews with some of the most well-known Italian and Italian American figures across the country, the special will also highlight previous Parade moments that include paying tribute to many of the parade’s former Grand Marshals, including celebrity chef Lidia Bastianich, renowned broadcaster Maria Bartiromo, championship race car driver Mario Andretti, fashion designer Roberto Cavalli, and last year's Grand Marshal, Massimo Ferragamo, the chairman of Ferragamo USA.

“When considering the health and safety of the hundreds of groups who march in our wonderful parade - and the thousands of New Yorkers who line Fifth Avenue to celebrate Italian American accomplishment – we wanted to find another way to celebrate our event that would have been held on Monday, Oct. 12, of this year,” said Pardo. “This is not a decision we took lightly, and it involved extensive discussion with our Board, our Officers, all senior Foundation staff, and many others.”

“October is Italian Heritage Month in New York and has always been a time to celebrate the culture,” said Debra O'Connell, president and general manager of WABC-TV. “We are happy that we’re able to preserve the tradition of the annual Parade by delivering it to our community as a virtual celebration, where everyone can safely experience it via broadcast from the comfort of their home or stream it from their mobile or connected TV devices.”

CCF Board Chairman and 2020 Celebration Chair Angelo Vivolo added that CCF will plan a Columbus Day Celebration that is endearing and representative of the Italian culture and tradition. CCF is asking all previous groups that have taken part in previous parades to contact them at parade@columbuscitizens.org. The Foundation is working to recognize and highlight the contributions of businesses, organizations and participants of the past parades as well as active members in the Italian American community for the 90-minute broadcast special with the goal of delivering an authentic mix of all the incredible groups, institutions and individuals of Italian origin that have contributed so much to the United States of America.

About Columbus Citizens Foundation
Columbus Citizens Foundation is a non-profit organization in New York City committed to fostering an appreciation of Italian American heritage and achievement. The Foundation, through a broad range of philanthropic and cultural activities, provides opportunities for advancement to deserving Italian-American students through various scholarship and grant programs. The Foundation organizes New York City's annual Columbus Celebration and Columbus Day Parade, which has celebrated Italian-American heritage on New York's Fifth Avenue since 1929. For more information, contact jwilson@columbuscitizens.org 

About ABC7/WABC-TV New York
WABC-TV has been the leader in local news and entertainment programming in the New York City area for more than 60 years. Producing more than 45 hours of live, local news and weather each week, Channel 7 “Eyewitness News” is the most watched local news in New York and the United States. WABC-TV also produces “Live with Kelly and Ryan,” weekdays at 9:00 a.m., which is seen in more than 200 markets across the U.S. Quality news and programming, cutting-edge technology and ongoing community outreach are the hallmarks of excellence that have consistently kept WABC-TV New York’s No. 1 station and the most-watched television station in the nation.