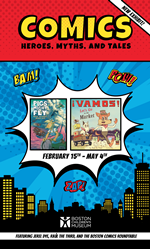 Comics: Heroes, Myths, and Tales invites us into the world of comics. Using drawn pictures and few words to capture the imagination, comics are a great way to explore the power of visual literacy - making it a perfect fit for visitors to Boston Children’s Museum.

Boston Children’s Museum will open Comics: Heroes, Myths, and Tales featuring work from artists Jerel Dye, Raúl the Third, and the Boston Comics Roundtable. This exhibit helps visitors explore storytelling through images. Comics are a series of images created to tell a story, say something silly, or share an idea, with little or no text. Comics: Heroes, Myths, and Tales will showcase many different drawing styles, as well as tools and processes used by the featured artists, are highlighted. Visitors are invited to share the adventures of creatures and characters both every day and fantastical.

The Museum will host a Meet the Artists on opening night - Friday, February 15 from 6:00 - 8:00pm. Zines and comics will be available for purchase during this event.

“Comics: Heroes, Myths, and Tales invites us into the world of comics. Using drawn pictures and few words to capture the imagination, comics are a great way to explore the power of visual literacy - making it a perfect fit for visitors to Boston Children’s Museum,” said Faith Johnson, Arts Program Manager. “This exhibit showcases the adventurous spirit and creativity of the Boston comics’ culture.”

Jerel Dye has been creating comics since 2009 and has produced several self-published mini-comics and comics stories for anthologies such as Inbound, Minimum Paige, and the award winning Little Nemo/Winsor McCay tribute Dream Another Dream. In 2012, he received the MICE comics grant for his mini-comic From the Clouds. Pigs Might Fly, his first graphic novel, was released in 2017 by First Second Books. Much of his art stems from a deep interest in science and technology though frequently contains a healthy dose of wonder. Jerel Dye received his BFA from UMass Dartmouth in Painting and his MFA at MassArt in the Studio for Interrelated media. Jerel also teaches courses in drawing, cartooning and comics. He lives in Jamaica Plain. http://jereldye.com/

Raul the Third is the award winning illustrator of the Lowriders series from Chronicle Books. He has collaborated with author Cathy Camper on Lowriders in Space, Lowriders to the Center of the Earth and Lowriders Blast from the Past from Chronicle books. He is also the Author/Illustrator of Vamos! Let's go to the Market from Versify books and Houghton-Mifflin Harcourt. In 2017, Raul the Third was awarded the prestigious Pura Belpre Award in illustration for his work in Lowriders Blast from the Past from the American Library Association. The Pura Belpre award is presented to a Latino/Latina writer and illustrator whose work best portrays, affirms, and celebrates the Latino cultural experience in an outstanding work of literature for children and youth. He lives in Somerville. https://www.raulthethird.com/

Visitors can take a workshop with Raúl the Third on Sunday, February 17 at 11:00am, 12:15pm, and 2:00pm. Jerel Dye and Raul the Third will have comics available for sale in The Shop at BCM for the duration of the show.

Boston Comics Roundtable is a community of comic creators meeting weekly in Cambridge since 2006. The ongoing forum includes artists and writers at all levels of experience who work in the comics medium or who wish to work in the comics medium. The premise is that comics is an art form that can encompass any genre—not just humor, action, but also autobiography, history, journalism and fiction, poetry and even abstraction. https://bostoncomics.com/

The Gallery installation is scheduled to run February 15 – May 4, 2019. For additional information, please visit http://www.BostonChildrensMuseum.org