Ryan White was an ordinary kid who used his voice to help change the world. He died 30 years ago on April 8, 1990. The teenager acquired HIV/AIDS as a result of a tainted blood product used to treat his hemophilia. His mother, Jeanne White Ginder, reflects on the many things he was able to change during his short life along with her thoughts on today's COVID-19 pandemic. There's a permanent exhibit surrounding Ryan White's life story at The Children's Museum of Indianapolis. 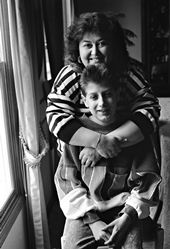 It’s extremely important to pay attention to the medical evidence and listen to medical experts and let them be the ones who guide us—not rumor. We have a chance to do something right now to save lives and that’s to stay home.

In 1984, a teenager educated a frightened world about a deadly disease. Kokomo, Indiana native Ryan White was just 13-years-old when he contracted HIV/AIDS through a tainted blood product used to treat his hemophilia. There was widespread fear, ignorance and panic.

30 years later, the world is facing another horrible disease that is claiming lives, COVID-19. It is also causing fear and spreading panic around the world. Often, history teaches valuable lessons that can help with challenges faced today.

Following his diagnosis, White was banned from attending his high school classes. He wanted to live a normal life and attend school like all the other kids his age. But panic and fear gripped the nation. So, White’s family took the school to court to pursue Ryan’s right to attend classes. As his physical battle to fight the disease and the legal battle wore on, the White family moved to Cicero, Indiana where White was welcomed into Hamilton Heights High School. There, he made several new friends and earned his high school diploma. White's influence spread to the entertainment industry. In fact, musician Elton John credits Ryan White with helping the singer turn his life around. Ryan died on April 8, 1990 from AIDS-related pneumonia at the young age of 18-years-old.

At the time, medical experts explained that HIV/AIDS was not spread through the air and that the disease was transmitted through tainted blood product, coming into direct contact with certain body fluids from a person with HIV such as blood, semen, and breast milk or from drug usage with tainted needles. Many people, however, did not understand or believe that. Ryan’s mother says things are not much different these days when it comes to disease. “There are a lot of similarities today with COVID-19 with how people are scared and everyone has an opinion on how you get the disease and how you don’t. It’s extremely important to pay attention to the medical evidence and listen to medical experts and let them be the ones who guide us—not rumor,” said Jeanne White Ginder. “We have a chance to do something right now to save lives and that’s to stay home.” White Ginder hopes people will work harder to be informed by the experts, make informed decisions as a result and show compassion. She went on to talk about how she still misses her son every day but is glad he made a huge difference in the world through the Ryan White Care Act, which provides a comprehensive system of HIV primary medical care, essential support services, and medications for people living with HIV to improve health outcomes and reduce HIV transmission among hard-to-reach populations. White Ginder has one regret, “We’ve not done our job by making the disease real to people. That was a big thing Ryan did. He made the disease real and it helped change lives.”

The Children’s Museum of Indianapolis proudly acquired all of the artifacts from Ryan’s teenage bedroom from his mother, Jeanne White Ginder. Under her watchful eye, the museum painstakingly recreated Ryan’s bedroom, which is part of the museum’s Power of Children permanent exhibit. She says some of Ryan’s happiest memories took place in that home, especially in his room filled with toy collections, posters and other memorabilia.

The world's largest children's museum is temporarily closed due to social gathering restrictions resulting from COVID-19; but, children and families can still learn more about Ryan White through a series of new blogs that can be found on The Children’s Museum website. Then when things return to normal, after the corona virus pandemic, Jeanne White Ginder plans to continue visiting Ryan’s room at The Children’s Museum of Indianapolis several times a year to share memories and stories about Ryan’s journey.

The courage and bravery of a young teenager fighting for his life and desire to be treated as a normal child is a strong message that stays with us today and can continue to help provide comfort and inspiration to people around the world facing difficult life circumstances.

The Children’s Museum of Indianapolis is proud to partner with Riley Children’s at Indiana University Health, Old National Bank and Ice Miller LLP.

Ryan White changed the worldThe courage of Ryan White was instrumental in changing the lives of celebrities and of those who had HIV/AIDS.

Jeanne White Ginder in front of recreation of her son Ryan White's roomAll of Ryan White's belongings are on display in this exhibit called, The Power of Children at the world's largest children's museum.

Ryan White's roomRyan White's belongings are on display in the Power of Children exhibit at The Children's Museum of Indianapolis.