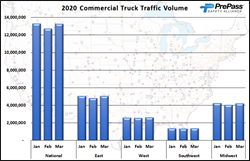 Many trucking businesses that were experiencing reduced volumes in the products they normally haul have modified their business model to provide trucking service for other products.

PrePass Safety Alliance compiled data from January through March 2020 to compare the total number of commercial vehicles traveling past its coast-to-coast bypass locations. Representing both PrePass and non-PrePass enrolled vehicles, 13.28 million trucks traveled through or past these locations during March. This number is up from 12.74 million in February and nearly as high as the 13.29 million trucks recorded in January.

These figures include both the number of trucks pulled into inspection facilities and those allowed to bypass them. It was on March 13 that the federal government declared the coronavirus a national emergency, which soon after resulted in an upending of personal and work life for millions in the United States.

PrePass recorded a 4.17% drop in weigh station truck volume from January to February, comparable to the 5.2% decline in the not seasonally-adjusted American Trucking Associations’ For-Hire Truck Tonnage Index for the same period. The PrePass analysis also supports a recent American Transportation Research Institute (ATRI) report showing trucks were continuing to move even as COVID-19 continued to spread.

This latest analysis from PrePass shows the trucking industry is not slowing down at all despite the COVID-19 outbreak, according to Steve Vaughn, vice president of field operations at PrePass Safety Alliance. He also does not anticipate the number of trucks out on the road to drop while the massive support efforts are required to sustain the supply chain demands associated with the COVID-19 pandemic.

“Trucks remain the engine of the supply chain and most daily items we have used in the past are still being used today,” Vaughn said. “The only real change is that truck volume has actually increased in some areas of the country, because of increased need for specific items.”

“The decline in the Midwest region level in March compared to January was relatively small,” Vaughn said. “Consumers are still buying many of the products they have bought in the past, while many trucking businesses that were experiencing reduced volumes in the products they normally haul have modified their business model to provide trucking service for other products.”

Vaughn, who spent nearly 30 years with the California Highway Patrol, including serving as chief of the Enforcement Services Division, added that because truck movements remain strong, so too does attention to truck safety.

“Some truck safety agencies are redeploying their personnel to put them back on road patrols based on specific needs requested by different state governors. However, one thing is not changing – they are still paying close attention to safety laws and regulations to make sure trucks and drivers are compliant,” Vaughn said.

While FMCSA has provided relief on driver hours of service requirements when assisting in emergency relief, the agency has also made it clear that the carrier is responsible for self-regulation under those circumstances.