Commissioner Daniel A. Nigro Named Humanitarian of the Year for the 2021 Columbus Day Parade And Celebration Weekend 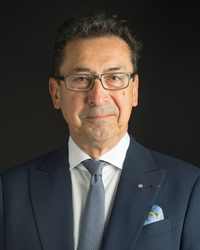 The annual Columbus Day Parade, the largest celebration of Italian American heritage and culture in the United States, will take place on Monday, October 11, 2021, beginning at 11:30 a.m. The parade is organized by Columbus Citizens Foundation, and in the year 2001, in honor of the city’s resilience and at its request, it was the first parade to take place following the World Trade Center attacks.

Marian Pardo, President of Columbus Citizens Foundation, said of the announcement: “In 2021, our Parade celebrates resilience, renewal and reunion, even as the world commemorates the 20th anniversary of 9/11 – a tragic act of terrorism that forever changed history. No one demonstrates those qualities of New Yorkers better than Commissioner Nigro, who was responsible for overseeing all rescue and recovery operations at the World Trade Center site in the aftermath of that terrible day and returned in 2014 to serve the city we all love and keep it safe. We are all uplifted by his clearheaded leadership and bravery in all things.”

Commissioner Nigro commented; “My family came to American through Ellis Island over 100 years ago. My identity as an Italian American has always informed my work ethic, and my dedication to serve. My parents were excellent examples to me – giving me a true sense of what serving your country and community truly meant. To be named as Humanitarian of the Year is an honor and a privilege.”

Columbus Celebration Chair Angelo Vivolo shared this thought on Commissioner Nigro, “Dan Nigro became Chief of New York’s Fire Department at the most tragic time in our city’s history. His ability to oversee the restructuring of the FDNY after it was so devastated during 9/11 is a testament to the dedicated and selfless person that he is. He led New York during our darkest days and returned as Fire Commissioner in 2014 to continue his service to our great city. There is no one more worthy to receive the CCF Humanitarian Award than Dan Nigro and we are so pleased that he will receive this rightful recognition at our 2021 Columbus Celebration.”

The annual Columbus Day Parade is the world's largest celebration of Italian American heritage and culture in the United States.

The Columbus Day Parade begins at 11:30 a.m. EST on Monday, October 11 and will air live on WABC-7 from 12 p.m. to 3 p.m. EST. For more information on the parade, please visit columbuscitizens.org.

ABOUT COLUMBUS CITIZENS FOUNDATION
Columbus Citizens Foundation is a non-profit organization in New York City committed to fostering an appreciation of Italian-American heritage and achievement. The Foundation, through a broad range of philanthropic and cultural activities, provides opportunities for advancement to deserving Italian-American students through various scholarship and grant programs. The Foundation organizes New York City's annual Columbus Celebration and Columbus Day Parade, which has celebrated Italian-American heritage on New York's Fifth Avenue since 1929. For more information, contact jwilson@columbuscitizens.org.

ABOUT COMMISIONER DANIEL A. NIGRO
Daniel A. Nigro was appointed the 33rd Fire Commissioner in the history of the New York City Fire Department by Mayor Bill deBlasio in 2014. Nigro is only the sixth individual in the agency’s 156-year history to have held every uniformed rank.

Commissioner Nigro’s long career with the Department began on November 29, 1969. Starting as a Firefighter at Engine Company 21 in midtown Manhattan he steadily rose through the ranks serving throughout the city as a Lieutenant, Captain, Battalion and Deputy Chief. Promoted to Staff Chief in 1995, he was instrumental in merging EMS into the FDNY and was named Chief of EMS in 1997. He was subsequently promoted to FDNY Chief of Operations. Following the attack on the World Trade Center on September 11th, 2001, and the death of his good friend, Chief of Department Peter J. Ganci, Commissioner Nigro was appointed to that position. He was responsible for overseeing all rescue and recovery operations at the site and the beginning of the unprecedented rebuilding of the Department.

Commissioner Nigro is a native New Yorker. He resides in Whitestone, Queens with his wife Lynn.