Local and National Virtual Events Planned for Upcoming Two-Part PBS Series THE BLACK CHURCH: THIS IS OUR STORY, THIS IS OUR SONG From Executive Producer/Writer/Host Dr. Henry Louis Gates, Jr. With Goal of Increasing Community’s Historic Awareness and Celebrating Gospel Music 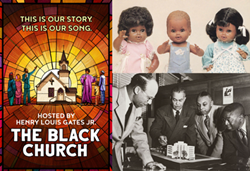 (Clockwise from Upper Left: THE BLACK CHURCH “This Is Our Story, This Is Our Song,” LOST LA “Shindana Toy Company” and “HOLLYWOOD’S ARCHITECT.” Courtesy of PBS, KCET and PBS SoCal respectively).

PBS SoCal and KCET, Southern California’s flagship PBS organizations for new PBS program premieres as well as award-winning, original content, announced today a programming slate in honor of Black History Month. Both stations will showcase a curated lineup of enlightening programs to help viewers increase awareness and understanding of racial history in America. Reinforcing both KCET and PBS SoCal’s commitment to sharing diverse and inclusive stories, the organizations will continue to roll out additional related digital content exploring Black History Month and the experience of Black Americans during the month of February.

One of those programs in particular, THE BLACK CHURCH “This Is Our Story, This Is Our Song” hosted by Dr. Henry Louis Gates, Jr. will be the focus of a series of virtual events – both locally and nationally. Local viewers will have the opportunity to attend one of two events. The first, will prompt interested viewers to send in a video of them singing along with a classic recorded gospel song, with select clips shared at an upcoming event featuring a discussion centered around the modern gospel music’s history in Los Angeles. A second event will feature an archival deep dive to examine the untold history of the Black Church in Los Angeles, with panelists sharing relevant stories in a community storytelling style screening. The goal of the virtual events is to tell a story of community and hope in this unique time in American history. More details on both regional events will be available soon at pbssocal.org/blackchurch.

The four-hour, two-part series THE BLACK CHURCH “This Is Our Story, This Is Our Song” from executive producer, host and writer Henry Louis Gates, Jr., traces the 400-year-old story of the Black church in America. The documentary reveals how Black people have worshipped and, through their spiritual journeys, improvised ways to bring their faith traditions from Africa to the New World, while translating them into a form of Christianity that was not only truly their own, but a redemptive force for a nation whose original sin was found in their ancestors’ enslavement across the Middle Passage. Featuring interviews with Oprah Winfrey, John Legend, Jennifer Hudson, Bishop Michael Curry, Dr. Cornel West, Pastor Shirley Caesar, Rev. Al Sharpton, Yolanda Adams, Rev. William Barber II, BeBe Winans, Bishop Vashti Murphy McKenzie and more. The documentary premieres Part One on Tues., Feb. 16 at 9 p.m. PT and Part Two on Tues., Feb. 23 on PBS SoCal.

With original, local content, KCET and PBS SoCal produce programs dedicated to a richer and more authentic California experience, helping residents understand and connect across communities. Original programming has showcased little-known African American artists for the past ten seasons in the arts and culture documentary series ARTBOUND and has examined Los Angeles’ hidden history of coded geographies and manufacturing ethnically correct Black dolls in LOST LA. While an African American architect defied the odds to become one of the most notable architects in history in HOLLYWOOD’S ARCHITECT: The Paul R. Williams Story. These original programs continue to inspire and are available to stream at kcet.org and pbssocal.org as well as on the free PBS Video App.

In addition, PBS is airing award-winning content to stations across the country including “Dave Chappelle: The Kennedy Center Mark Twain Prize,” IN THEIR OWN WORDS: “Muhammad Ali,” “The Jazz Ambassadors,” “JOSEPHINE BAKER: The Story of an Awakening” as well as episodes of JAZZ from prolific documentary filmmaker Ken Burns. Additional content that comprises this special curated collection includes episodes of ANTIQUES ROADSHOW, AMERICAN MASTERS, FINDING YOUR ROOTS, AMERICAN EXPERIENCE, GREAT PERFORMANCES, MASTERPIECE and more.

Select content slated to air during the next month is listed as follows (*schedule subject to change):

“HOLLYWOOD’S ARCHITECT: The Paul R. Williams Story” - Tues., Feb. 2 at 9 p.m. on PBS SoCal
The special tells the story of African American architect Paul R. Williams as he defied the odds to become one of the most notable architects in history.

“The Jazz Ambassadors” - Wed., Feb. 3 at 10 p.m. on KCET
The Cold War and civil rights collide in this story of music, diplomacy and race.

LOST LA “Shindana Toy Company” - Thurs., Feb. 4 at 6:30 p.m. on KCET
A look at the lasting impact of one Operation Bootstrap initiatives, the Shindana Toy Company, which left a lasting mark on the American doll industry by manufacturing ethnically correct black dolls.

IN THEIR OWN WORDS: “Muhammad Ali” - Thurs., Feb. 4 at 7 p.m. on PBS SoCal
Follow Muhammad Ali's rise from Columbia Gym in Louisville, Kentucky to international fame, as he transcended his great athletic achievements to become one of the most influential Americans of his time.

AMERICAN MASTERS: “Charley Pride: I’m Just Me” - Thurs., Feb. 4 at 8 p.m. on PBS SoCal
Traces the improbable journey of Charley Pride, from his humble beginnings as a sharecropper’s son on a cotton farm in segregated Sledge, Mississippi to his career as a Negro American League baseball player and his meteoric rise as a trailblazing country music superstar.

JAZZ: “Swing: Pure Pleasure” - Thurs., Feb. 4, 18 and 25 at 9 p.m. on PBS SoCal
As the Great Depression drags on, jazz comes as close as it has ever come to being America's popular music. From prolific documentary filmmaker Ken Burns.

AMERICAN EXPERIENCE: “The Murder of Emmett Till” - Sat., Feb. 6 at 7 p.m. on KCET
The murder and the trial that horrified the nation and the world. Till's death was a spark that helped mobilize the Civil Rights movement.

ARTBOUND “How Sweet the Sound: Gospel in Los Angeles” - Sun., Feb. 7 at 5 p.m. on KCET
Artists like James Cleveland and Aretha Franklin captured live recordings of the church experience of South Central and the voices and sentiment of the people coming together to give birth to a new gospel sound and the election of L.A.’ s first black mayor, Tom Bradley.

MASTERPIECE: “The Long Song” - Sun., Feb. 7 and Feb. 14 at 10 p.m. on PBS SoCal
Tamara Lawrance and Hayley Atwell star in this three-part miniseries based on Andrea Levy's award-winning novel about the end of slavery in Jamaica.

AMERICAN EXPERIENCE: “Goin’ Back to T-Town” - Mon., Feb. 8 at 9 p.m. on PBS SoCal and Sat., Feb. 13 at 7 p.m. on KCET
The story of Greenwood, an extraordinary Black community in Tulsa, Oklahoma, that prospered during the 1920s and 30s despite rampant and hostile segregation.

AMERICAN EXPERIENCE: “Voice of Freedom” - Mon., Feb. 15 at 9 p.m. on PBS SoCal and Sat., Feb. 20 at 6 p.m. on KCET
In 1939, after being barred from performing at Constitution Hall because she was Black, Marian Anderson triumphed at the Lincoln Memorial in what became a landmark moment in American history.

“JOSEPHINE BAKER: The Story of an Awakening” - Mon., Feb. 15 at 10 p.m. on PBS SoCal and Wed., Feb. 10 at 10 p.m. on KCET
Baker, born into poverty in Missouri in 1906, moved to France where she became a dancer hailed as the Queen of Paris, joined the French Resistance and became a civil rights activist.

“THE BLACK CHURCH: This Is Our Story, This Is Our Song” Part One - Tues., Feb. 16 and Feb. 23 at 9 p.m. on PBS SoCal and Sun., Feb. 21 at 6 p.m. on KCET
Dr. Henry Louis Gates, Jr. takes viewers on a two-part journey through the rich and complex history of the Black Church to reveal how this uniquely American institution has influenced nearly every chapter of the African American story. Part One explores the roots of African American religion beginning with the trans-Atlantic slave trade and the extraordinary ways enslaved Africans preserved and adapted their faith practices from the brutality of slavery to emancipation.

AMERICAN MASTERS: “Maya Angelou” - Wed., Feb. 17 at 9 p.m. on KCET
The story of iconic writer, poet, actress and activist Maya Angelou whose life intersected some of the most significant moments in the recent history of the United States of America.

“Driving While Black: Race, Space and Mobility in America” - Fri., Feb. 19 at 9 p.m. on PBS SoCal
Discover how the advent of the car brought African Americans new freedom but also dangers.

“THE BLACK CHURCH: This Is Our Story, This Is Our Song” Part Two - Tues., Feb. 23 at 9 p.m. on PBS SoCal and Sun., Feb. 28 at 6 p.m. on KCET
Dr. Henry Louis Gates, Jr. takes viewers on a two-part journey through the rich and complex history of the Black Church to reveal how this uniquely American institution has influenced nearly every chapter of the African American story. Part Two follows the Black church as it expanded its reach to address social inequality and minister to those in need, from the Jim Crow South to the heroic phase of the civil rights movement and the Black church’s role in the present.

AMERICAN MASTERS: “Lorraine Hansberry” - Wed., Feb. 24 at 8 p.m. on KCET
Explore the inner life and works of the activist, playwright and author of A Raisin in the Sun, Lorraine Hansberry. Narrated by actress LaTanya Richardson Jackson and featuring the voice of Tony Award-winning actress Anika Noni Rose as Hansberry.

“Rising from the Rails: The Story of the Pullman Porter” - Sat., Feb. 27 at 7 p.m. on KCET
This film explores the little-known history of the African American men hired to work on railroad sleeping cars beginning in the late 1860s.

These shows and more are available to stream on the free PBS Video App.

Join the conversation on social media by tagging #BlackHistoryMonth #BlackChurchPBS

About PBS SOCAL and KCET
PBS SoCal and KCET are both part of the donor-supported community institution, the Public Media Group of Southern California, which was formed by the merger of PBS SoCal and KCETLink Media Group. PBS SoCal is the flagship PBS station for diverse people across California and delivers content and experiences that inspire, inform and educate. PBS SoCal offers the full slate of beloved PBS programs including MASTERPIECE, NOVA, PBS NewsHour, FRONTLINE, and a broad library of documentary films including works from Ken Burns; as well as educational content including PBS KIDS programs including DANIEL TIGER’S NEIGHBORHOOD and CURIOUS GEORGE. KCET is on-air, online and in the community, and plays a vital role in the cultural enrichment of Southern California. KCET offers a wide range of award-winning local programming as well as the finest public television programs from around the world. Throughout its history, KCET has won hundreds of major awards for its local and regional news and public affairs programming, its national drama and documentary productions and its website, kcet.org. For additional information about both KCET and PBS SoCal productions, web-exclusive content, programming schedules and community events, please visit kcet.org and pbssocal.org KCET Originals and PBS programming are available to stream on the FREE PBS App on iOS and Android devices, Roku, Amazon Fire TV, Apple TV, Android TV, Samsung Smart TV, and Chromecast. KCET is also available to watch live on YouTube TV, Amazon and Roku platforms. For more information please visit kcet.org/apps.