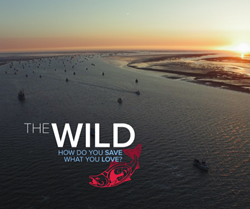 “Bristol Bay is the last fully intact wild salmon run on our planet," said Titus. We need to save it for the Indigenous people who have relied on wild salmon for 4,000+ years and for every American who benefits from the last wild places on earth. (This) is our last chance to get it right.”

Eva’s Wild and Area 23a Films announced today The North America Livestream Premiere screening event of the award-winning documentary, THE WILD, which will take place virtually Aug. 6th at 8 p.m. EST/5 p.m. PST. This online gathering serves as an urgent call-to-action for individuals, organizations and communities to tell the U.S. Army Corps of Engineers to pause the permitting of a Canadian mining company seeking to excavate North America's largest open-pit copper mine in Bristol Bay, Alaska—home to the last fully intact salmon run in the world.

The seesaw legal battle between Pebble Mine and opposition groups spans over two decades, and the apex of this battle is expected to emerge with a decision by Aug. 30 – less than two months away. If Pebble Mine comes to fruition, its waste could contaminate critical waters that feed the last fully intact wild salmon system on earth and could ruin this fully sustainable food source and economy, forever.

Here’s why this issue has the attention of celebrities, fishermen, educators, chefs, tribes, theaters and lawmakers around the country:

This pioneering livestream of THE WILD is not just a screening, but an experience, and will include live conversations with film director Mark Titus, luminaries from the film and fierce stakeholders in the fight for Bristol Bay; critical calls-to-action for participants; an opportunity to purchase wild Bristol Bay salmon shipped to registrants’ doors with recipes and rubs - and an action kit and virtual reality goggles to explore Bristol Bay from the comfort of participants’ own homes.

“As a fisherman who has witnessed numerous other salmon runs around the world wither away, I understand Bristol Bay is our last chance to get it right,” said Titus. “Bristol Bay is the last fully intact wild salmon run on our planet. We need to save it for the Indigenous people who have relied on wild salmon for 4,000+ years and for every American who benefits from the last wild places on earth. We have to save what we love, together.”

The virtual event will provide education on this issue and further elevate the voices across the U.S. and Canada who oppose Pebble Mine, which also include some of the largest financial, environmental and outdoor sporting groups in North America, such as Orvis, Tiffany & Co., The Natural Resource Defense Council and Trout Unlimited.

Two weeks ago, Morgan Stanley was the sixth major investor to announce its divestment from Pebble Mine’s parent company. Former Rio Tinto environment and permitting chief, Richard Borden estimated, based on his independent economic analysis, the proposed Pebble Mine project would lose $3 billion and is almost certainly financially infeasible.

“Dwindling investment partners are indicative of failing financial status and lack of social license,” said Titus, who was inspired to make THE WILD film to illuminate the current administration's behind-the-scenes dismantling of EPA safeguards enacted to protect the salmon, water and people of Bristol Bay.

For screening information, additional tour dates, and how readers can take action go to: http://www.evaswild.com. Follow us @TheWildFilm

25% of ticket sales from the August 6th goes to the coalition working to save Bristol Bay.

Ticket price is valued at $12 but will be sold on a sliding scale so anyone may attend the event.
Eva’s Wild is an impact brand curating authentic storytelling that reveres the wild in ourselves and on our planet.