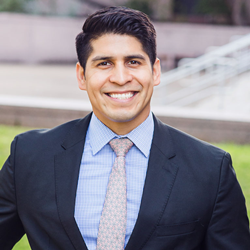 “As a struggling student, I walked into the Communities In Schools office looking for help," said Saldaña. "Today, I walk into the role of President and CEO with an opportunity to pay it forward."

Communities In Schools® (CIS), the national organization that empowers all students to stay in school and on a path to graduation, announced today that former San Antonio City Councilman and CIS Alumnus Rey Saldaña has been named President and CEO.

“Rey’s track record as a successful policymaker, an education advocate and a tireless champion for young people make him uniquely qualified to carry out our strategic plan to ensure that every student in America has a community of support inside and outside the classroom,” said Communities In Schools National Board Chair Elaine Wynn. “Moreover, his remarkable journey from former CIS student to national leader of our organization, sends an inspiring message to all young people about the power they have to write their own success story, no matter where they start out in life.”

Saldaña assumes the role of President and CEO of Communities In Schools in mid-March, and will lead a national office that partners with 128 independent CIS affiliates and licensed organizations to ensure all students have the academic and non-academic supports they need to realize their full potential in school and life.

Most recently, Saldaña served as the Regional Advocacy Director for the Raise Your Hand Texas Foundation, and the Chair of the San Antonio Metropolitan Transit Agency - VIA. Prior to that, he served four terms on the San Antonio City Council where he was first elected at age 24, becoming the youngest councilperson in that city’s history. During his tenure, Saldaña successfully campaigned for funding of the city’s early childhood initiative (Pre-K 4SA) and streamlined the city and county’s child truancy court.

“Growing up living below the poverty line, there were enough challenges to confront before I had the chance to dream,” said Saldaña. “As a struggling student, I walked into the Communities In Schools office looking for help. Today, I walk into the role of President and CEO with an opportunity to pay it forward. Looking back, I never could have imagined this for myself. It is an extraordinary statement that I am asked to lead an organization whose mission centers on allowing more students to command their future and license their dreams. Throughout my life, and my public service, I have witnessed the fact that my situation is not unique. There are many young people out there who face barriers in life, and while there are constant challenges, what remains consistent is CIS’s investment in a national network of people who continue to support those children in our schools and our communities.”

The son of immigrants, Saldaña was born and raised in San Antonio and attended South San Antonio High School where he first received supports from Communities In Schools. He holds a master’s degree from Stanford University’s Graduate School of Education where he studied policy, organization and leadership studies, and two bachelor’s degrees in political science and communications from Stanford. Saldaña has a longstanding commitment to improving the academic and life outcomes for all students. He previously worked with The University of Texas at San Antonio’s Office of Community Engagement and served as the Chief Engagement Officer with KIPP San Antonio Public Schools. He also taught as an adjunct professor at Trinity University and Palo Alto Community College.

Communities In Schools National Board Members expressed their enthusiasm for naming a President and CEO who represents the next generation of education leadership in our country.

“Now more than ever, we need a dynamic education leader who understands both the challenges and the opportunities that young people face in our country,” said former U.S. Education Secretary and CIS National Board Member Arne Duncan. “I am thrilled that he’s joining Communities In Schools so we can support every student, improve our schools and strengthen our communities.”

“Rey is the embodiment of the idea that with the right supports, any child can realize their full potential and achieve their dreams,” said CIS National Board Secretary and search committee member Darilyn Olidge. “He’s committed to making sure that every student can succeed in and beyond the classroom.”

The National Communities In Schools Board expressed their gratitude to outgoing President and CEO Dale Erquiaga who launched the new strategic plan and spearheaded new initiatives to help improve the lives of 1.62 million children in 25 states and the District of Columbia. Erquiaga has agreed to maintain an ongoing affiliation with CIS as a Visiting Fellow. In that role he will consult with Saldaña to support expansion and sector entrepreneurship strategies in support of the organization’s business plan.

About Communities In Schools
Communities In Schools ®(CIS) is a national organization that ensures all students have what they need to stay in school and on a path to a brighter future. Working directly inside more than 2,500 schools and community sites across the country, we connect 1.62 million students to caring adults and community resources designed to help them succeed in school and life. With a proven mix of evidence-based practice and human capital, we do whatever it takes to empower kids to realize their full potential.