Dr. Lawrence D’Angelo and the Division of Adolescent and Young Adult Medicine will be honored for their work with The Burgess Clinic 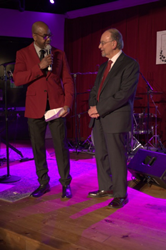 On April 2, 2019, the Division of Adolescent and Young Adult Medicine at Children’s National Health System was honored with the Thurlow Evans Tibbs, Jr. Award for outstanding individual service in HIV prevention by Us Helping Us, People Into Living, a community-based AIDS service organization committed to reducing HIV infection in the African American community. The award recognizes outstanding service in HIV prevention and support services for the African American community.

“We are so honored to receive the Thurlow Evans Tibbs, Jr. Award from our colleagues and friends, Us Helping Us, People Into Living,” said Dr. Lawrence D’Angelo, director of Youth Pride Clinic and Burgess Clinic, a division of Adolescent and Young Adult Medicine at Children’s National. “We have always considered US Helping Us as an essential partner in this struggle and so it’s ingrained as a part of the community. It has been our honor to work with them, and an equal honor to be recognized in this way by them. We are so grateful and so proud!”

Dr. Lawrence D’Angelo and his team at the Burgess Clinic have cared for over 750 HIV infected youth, many who have gone on to live long and productive lives since the clinic opened its doors in 1988. The clinic started the Washington Area Consortium on HIV infection in Youth (WACHIVY) which later became MetroTeen AIDS, one of the largest and most successful prevention education programs for youth in the country. It also created the in house peer education group, Teens Against the Spread of AIDS (TASA) which gained regional and national prominence. The Burgess Clinic is the home of over a dozen NIH and foundation grants that supported the diagnosis and treatment of HIV infected youth, accounting for over $55 million in support.

“Receiving the Thurlow Evans Tibbs, Jr. Award from Us Helping Us is an honor beyond anything we could have hoped for, says Dr. D’Angelo. Our programs were started at the same time to meet similar needs and for years we have worked together and appreciated each other’s efforts in serving our community. D.C. could not have attained the progress it has made in the struggle against HIV without Us Helping Us and knowing that makes this award all the more special.”

Us Helping Us, People Into Living, Inc., was incorporated in 1988 as a support group for HIV-positive black gay men.

About Children’s National Health System
Children’s National Health System, based in Washington, D.C., has served the nation’s children since 1870. Children’s National is one of the nation’s Top 5 pediatric hospitals and, for a second straight year, is ranked No. 1 in newborn care, as well as ranked in all specialties evaluated by U.S. News & World Report. It has been designated two times as a Magnet® hospital, a designation given to hospitals that demonstrate the highest standards of nursing and patient care delivery. This pediatric academic health system offers expert care through a convenient, community-based primary care network and specialty outpatient centers in the D.C. Metropolitan area, including the Maryland suburbs and Northern Virginia. Home to the Children’s Research Institute and the Sheikh Zayed Institute for Pediatric Surgical Innovation, Children’s National is the seventh-highest NIH-funded pediatric institution in the nation. Children’s National is recognized for its expertise and innovation in pediatric care and as a strong voice for children through advocacy at the local, regional and national levels.