Composers confront and rise above their disabilities at the KSO 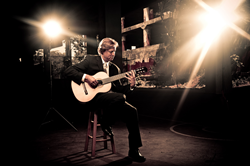 “One owns a curse, but shares a blessing." — KSO Music Director James Cassidy

The Kentucky Symphony Orchestra continues its flavorful, single barrel-esque 28th season with a musical proverb. Physical disabilities and handicaps afflict those in all walks of life. Yet those afflicted persevere, and many find success and acclaim through their talents and efforts, which begs the proverbial query — are these impairments a blessing or a curse?

The KSO explores three composers who overcame serious disabilities to pen great music. Swedish composer Allan Pettersson wrote 17 symphonies, but only completed five in his own hand before developing crippling Rheumatoid Arthritis, which further isolated him.

“The music forming my work is my own life, its blessings, its curses: in order to rediscover the song once sung by the soul.”
— Allan Pettersson

Joaquín Rodrigo was blind since the age of 3, yet he studied music and wrote it down in Braille. Rodrigo would then dictate each work subsequently to a copyist, note by note, instrument by instrument, modification by modification, to produce a score in musical notation. Afterwards, Rodrigo proceeded to make final corrections with the assistance of his wife.

His Concierto de Aranjuez has become one of the classic concerti of the 20th century, and its Adagio movement is one of the most beautiful in orchestral music. Grammy award-winning classical guitarist Jason Vieaux joins the KSO for Rodrigo’s concerto led by KSO music director James Cassidy.

Rounding out the program is Ludwig Van Beethoven’s Symphony No. 6 (Pastoral). Beethoven became afflicted with tinnitus and his hearing notably decreased after his Second Symphony. By the time of his Sixth Symphony his hearing was very limited, and the sounds of nature that he employed in his Pastoral symphony came from his earlier countryside strolls and recollections.

Whether these composers would have created the sublime music represented on this program were it not for their afflictions no one will ever know, but their output manifests itself as a blessing for the generations that have enjoyed them since. James Cassidy remarked about his program title — “One owns a curse, but shares a blessing. These composers never allowed their physical debilities to prevent their muse from being heard. I would say they are blessed, as are we to continue to share their gifts.”