“Amazing and Amusing Democrats” from Christian Faith Publishing author Compton Oliver is an account that digs deeper into how this party successfully swayed the minds of their followers, especially the millennial generation. 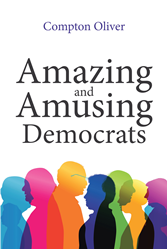 “Amazing and Amusing Democrats”: a novel that talks about democratic leadership’s political fountain of poison that has inflicted a lot of things in both the mind and behavior of the modern generation. “Amazing and Amusing Democrats” is the creation of published author Compton Oliver, a Christian conservative who is on a mission to fight human trafficking and sexual abuse of boys and girls.

Oliver writes, “Compton Oliver is a businessman who knows all about failures and ultimate success too. He has transformed and defied all the negative stereo-typed victimism that defied much of the black community. Of course, the odds were against him. However, he has become a successful real estate investor and entrepreneur.

“He migrated from Guyana (formerly British Guiana) in 1980. Upon arrival in the United States as a permanent resident, he was hellhole broke to the degree that he had to borrow a dime from a passenger while waiting at Kennedy International Airport, New York City. That was his defining moment when he made a vow to himself. He also realized that it was better to be prosperous than to be poor.

“The rest of his accomplishments are evidence that America is still the greatest country in the world and a land of opportunity to anyone who would apply himself. Just to name a few of his accomplishments: Oliver’s Liquidation Store, Quick Cars Unlimited (used car dealership), Creative Ventures (garment printing), and Bridging the Gap (a nonprofit organization dedicated to working with troubled youth).”

Published by Christian Faith Publishing, Oliver’s new book is a stirring account that shows to readers how democratic leaders lead a country with a huge number of people.

This book was written to stimulate conversation, discussion, and even some debate in families around the kitchen table to establish a comradely fellowship instead of political distrust and intolerance.

View a synopsis of “Amazing and Amusing Democrats” on YouTube.

Consumers can purchase “Amazing and Amusing Democrats” at traditional brick & mortar bookstores, or online at Amazon.com, Apple iTunes store, or Barnes and Noble.

For additional information or inquiries about “Amazing and Amusing Democrats,” contact the Christian Faith Publishing media department at 866-554-0919.