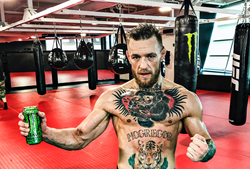 "We are excited to continue our partnership with Conor McGregor. His bold confidence, determination and aggression are synonymous with our brand values and we are proud to have him represent our company - Marianne Radley SVP of Marketing Monster Energy

Monster Energy announces a continued sponsorship deal with MMA mega Superstar Conor “The Notorious” McGregor. The ultra famous Irishman has been part of Monster Energy’s MMA program since 2015, and was one of the first to join the elite team. The announcement is just weeks ahead of the ‘Fight of the Century’ – Mayweather vs. McGregor– where McGregor will set out to do what no one has ever done – defeat Floyd Mayweather on August 26th at the T-Mobile Arena in Las Vegas.

The sponsorship will ensure that the iconic M-Claw will be emblazoned on his shorts for this historic fight, as well as his UFC title defense this year.

“After two years as a Monster Energy UFC fighter, we are excited to continue our partnership with Conor McGregor as he prepares for the biggest fight in history,” said Marianne Radley, Senior Vice President of Marketing, Monster Energy. “His bold confidence, determination and aggression are synonymous with our brand values and we are proud to have him represent our company.”

In furtherance of the partnership with McGregor, Monster Energy has shot a :30 commercial spot that can be seen by fans on Monster Energy’s website, across various digital platforms and on select television programming.

The move symbolizes Monster Energy’s continued commitment to MMA and ongoing support of the world’s best-in-class athletes of which McGregor undeniably sits at the top as one of the highest-profile athletes in the world.

Only an elite few embody the Monster Energy Beast mantra, and McGregor is the epitome of Monster’s high- energy values and drive to over achieve under pressure.

No mixed martial artist has ever commanded the attention and hype that McGregor has earning him global household recognition for the ‘Money Fight,’ which is expected to break every PPV record, as well as offer increased access – through movie theater showings – to virtually anyone world-wide that wishes to watch the fight.

The fearless Irishman is undaunted in his boxing campaign despite zero professional boxing rounds under his belt facing off against the much heralded and undefeated eleven-time, five-division professional boxing world champion Mayweather. “Mystic Mac” McGregor is confident he will beat the boxing titan into permanent retirement. McGregor’s superhuman confidence, charisma, relentless drive, perseverance, and raw talent has elevated his stock to one of the greatest fighters of all time in short order. If anyone can be the first to beat Mayweather, McGregor is the man with the magic to make history.

McGregor has not fought since 2016 when he made history by knocking out Eddie Alvarez to claim his second title and be the first and only fighter to become a two-division UFC champion and hold two titles simultaneously – featherweight and lightweight.

The 29-year old has a 21-3 career record in mixed martial arts with a 9-1 record in UFC and two previous Cage Warriors titles.

Fueled by his rabid fans from all over the world, this monumental event will go down as one of the biggest events in the history of fighting with record breaking crowds, box-office records and is expected to be the most viewed combat sports event on record. No doubt McGregor will deliver in typical fashion.