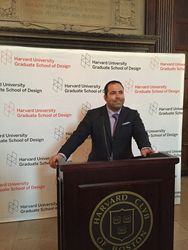 Growing up, I always wanted to attend Harvard, and now, they have chosen me to be a part of this once in a lifetime experience, and I will be able to see my work on a global stage.

Manny Angelo Varas, 35, a south Florida business leader has graduated after nearly two years of attending the graduate program at Harvard University Graduate School of Design in Cambridge, MA. Harvard is ranked as the #1 design school in the United States. The MV Construction Group president, who prides himself in rebuilding the Miami Skyline, one unit at a time, now joins U.S President’s and Fortune 500 CEO’s as a Harvard alumni.

This prestigious graduate program attracts thousands of applicants each year, yet only 35 top global executives are hand-picked to participate in the program each year. Varas will join the likes of Fahd Al-Rasheed, CEO of Saudi Arabia’s King Abdullah’s Economic City Mega project, who was ranked as one of 25 of the most powerful Arabs in the world.

Varas and the other participants worked on architecture, interior design, and complicated development structures with some of the world’s most influential architects and developers. “This truly is a dream come true for me,” says Varas. “Growing up, I always wanted to attend Harvard, and now, they have chosen me to be a part of this once in a lifetime experience, and I will be able to see my work on a global stage.”

Varas plans on utilizing all of his newly acquired knowledge in conjunction with his years of experience, and previous educational background to bring the utmost quality in design and functionality to his clients. Varas who is now a Harvard Alumni also currently holds a Masters in Business Administration MBA from Florida International University, is a state licensed General Contractor, a licensed Real Estate broker as well as a LEED Accredited Professional by the U.S. Green Building Council. Varas’s business achievements began over a decade ago, when he was appointed by U.S. President George W. Bush to the Presidential Business commission and then made history in 2004 by becoming the youngest President/CEO and sole owner of a Hispanic business to be ranked 255 amongst Hispanic Magazine’s Business 500. Manny Varas is the President & CEO of MV Construction Group which has acquired deals on many of South Florida’s most iconic and well-known developments, totaling over 1,000,000 sq. ft. of construction and $500 million in real estate value.