A collection of outstanding continental and English furniture and furnishings purchased from such notable antique dealers as Agostino Antiques, Florian Papp Antiques of NYC and Taylor B Williams Antiques, Chicago IL, features prominently in the Kaminski Auction August 18th and 19th, 2018 at 10:00 AM EST. 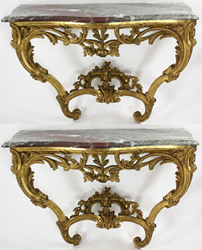 A collection of outstanding continental and English furniture and furnishings purchased from such notable antique dealers as Agostino Antiques, Florian Papp Antiques of NYC and Taylor B Williams Antiques, Chicago IL, features prominently in the Kaminski Auction August 18th and 19th, 2018 at 10:00 AM EST.

A large Adams satinwood and gilt cellaret decorated with a gilt gadrooned edge over a classical urn is an outstanding piece. The collection continues with a set of English 19th-century chinoiserie Tole tea canisters, a Samson "Chinese export" armorial porcelain covered vase and an 18th-century Chinese export Mandarin porcelain bowl.

Complimentary offerings from other New York and Palm Beach estates include a circa 1830 Austrian Empire period walnut table having three carved mythological dolphins and a circa 1880 Italian Renaissance revival carved walnut nine-drawer chest with elaborate backsplash and five shelves.

A spectacular ebonized Steinway concert piano is sure to attract attention. The circa 1889, Model D concert grand piano, serial number 65665 is estimated to bring $5,000-$10,000.

European fine art highlights include two Russian portraits. The first is a portrait of Empress Maria Feodorovna (1759-1828), wife of Emperor Paul Petrowitz I of Russian, and the second is the Emperor Paul Petrowitz I (1754-1801), son of Empress Catherine the Great. Both paintings were purchased originally in Paris in 1915, and later, from the Helen Schachter estate, NYC. The portraits are labeled, oil on canvas and measure thirty-three inches by twenty-eight inches, (frame). Another work by Friedrich August von Kaulbach (1850-1920), titled “The Jewess - Judith with a Sword”, oil on canvas was also purchased from the Helen Schachter estate, NYC, NY.

An excellent addition to the sale is a view of the Grand Canal Venice with Saint Mark's Square, oil on canvas, signed by the artist William James (fl. 1761-1771), presented in an antique carved gilt Rococo frame measuring forty-seven inches by sixty-five and a half inches (frame). The provenance of the painting is originally from the Montelatici family of New York, Florence Italy and Miami Beach.

Modern highlights include an abstract painting titled ‘Combustione’, by the Italian painter and sculptor, Alberto Burri, and a portrait by the German expressionist Karl Hofer. Both have estimates of $40,000-$60,000.

New England art includes a collection of seven Brian Coole paintings from a Charlestown, Massachusetts collector including 'View of Boston State House and Bunker Hill from Chelsea,’ ‘Taking the Flag at Bunker Hill,’ and ‘The Burning of Charlestown’ to name a few.

There is also a signed Aldro Hibbard, winter scene of Vermont, oil on canvas board from a Beverly, Massachusetts estate.

Other eclectic entries of interest include a Coalport partial dessert service consisting of 22 pieces decorated with the hand-painted story of Cupid, a 19th-century Chinese Rose Medallion barrel-form garden seat and a 19th-century three-mast sailing ship model from a Wakefield, Massachusetts estate.

A selection of exceptional antique and semi-antique Sarouk, Isfahan and Tabriz rugs of outstanding quality from a Brookline, Massachusetts estate rounds out the offerings in the August auction.

Preview for this exciting auction is held at the Kaminski Auctions gallery, 117 Elliott Street, Rt.62, Beverly, Massachusetts, Tuesday- Friday, 10:00 AM-5:00 PM and day of sale starting at 8:00 AM. Preview is open while the auction is live. For more information and to sign up to bid with KaminskiLIVE go to http://www.kaminskiauctions.com.

Portrait of Emperor Paul Petrowitz I