Controlexpert to expand business in asia 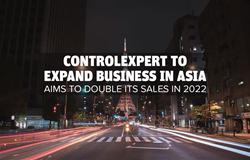 German company ControlExpert, which uses artificial intelligence (AI) to calculate appropriate car repair costs, will expand business in Asia. ​In addition to entering the Japanese market on full scale, the company plans to expand into Malaysia and Indonesia by 2021. ​The company aims to double its sales in 2022 as the insurance industry shifts from analog to digital.

Headquartered in Langenfeld, Germany, the company is one of Germany's “hidden champions”. ​It deals with 90% of German insurers and handles 80% of insurance claims related to car accidents in Germany.

The company, which was founded in 2002, is a pioneer in the “InsurTech (Insurance Tech)”, a hybrid of insurance and technologies and an industry that is becoming active. ​The company's service began with manually making decisions on whether the cost estimate provided by the repair shop was appropriate, on behalf of the insurance company.

In Germany, about half of the estimates provided by repair shops contain errors or irregularities. There have been challenges where insurance companies have had to pay more than actually needed, or they have had to send accident investigators to reexamine the case which incur costs.

​ControlExpert's service uses AI, which learns data accumulated by in-house accident investigators, to automatically recognize and analyze photos and car model information, including parts where the accident affected. ​The AI automatically calculates which parts need to be replaced and how much it will cost to repair, and checks whether the estimate is correct.

Only when the estimate is doubtful, the cost is controlled after being judged by the investigator. ​The company's largest customers in Germany say they save more than 100 million euros (approx. 12.4 billion yen) a year from using the service.

​The company began using AI around 2014. ​Since then, the number of annual requests from insurance companies has doubled from 2014 to about 10.4 million in 2019. ​The accuracy of AI will increase with the accumulation of images and evaluation data from investigators.

​Depending on the insurance company, the insured can send a photo of the car that was involved in the accident through their smartphone and receive an estimate of insurance and repair costs in as short as a few minutes. ​This can shorten the time required for the insured to wait, which would have been a few weeks, and improve customer satisfaction.

Japan has been selected as the third Asian market following China and Thailand. ​In other countries, ControlExpert does business with Sompo Japan and Tokio Marine. ​In Japan, the company has already signed contracts with Sompo Japan as well as AXA Direct.

Japan's insurance market is the third largest in the world, but it is hard to say that digitization is progressing. Markus Hillebrand, CEO of Asia Pacific stated, “While Japan lacks investigators with expertise due to its aging population, there are still many paper-based billing procedures such as fax. We can contribute to digitization and efficiency”. ​The company currently has seven employees in Japan but will double that number by 2021.

​In 2021, the company plans to open locations in countries where it has yet to launch operations, such as Malaysia, Indonesia and Australia. ​The company plans to expand outside Asia as well including France and Canada. ​Global Data, a British research firm, predicts that in 2023 the car insurance market in Asia and Oceania will reach 257.8 billion dollars (approx. 27 trillion yen), with annual growth of 3.2% from 2019. ​The growth is expected to increase in synergy with the trend of digital transformation (DX) in Japan and other countries.

We interviewed Nicholas Witte, the CEO who introduced AI to the company that his father founded and trained ControlExpert to be the pioneer in insurance tech.

​--How did AI change ControlExpert?
​“At first, everyone was afraid AI would take away all the manual work. But a year or two later, it became clear that the combination of human involvement and AI was important. Because there is no one same accident.”
​“It would be ideal if everything could be automated, but we are working to reduce the amount of time people are involved. Instead of people reading every 10-pager invoice, AI would pick out the parts that need to be read and need decision on.”

--How will you expand your business?
​“First is to increase the usage rate among existing customers, second is to expand the range of services, third is to expand the number of regions available, and the final step is to expand not only in the insurance industry but also in target industries such as car sharing. There is greater room for growth, and we will double our sales in two years.”

​--Do you have any challenges?
​“Securing the right people. There is no compromise. There are currently 30 Data Scientists but in five years there will probably be 50. Even major insurance companies do not have such 50 employees.”

​--You received investment from German insurance company Allianz. ​Won’t Allianz's competition run away?
​“Customers’ reactions vary but Allianz is a shareholder who knows the insurance industry well and keeps management independent. It is also trusted when we enter new markets.”