Climate negotiations at the Sharm El-Sheikh COP27 conference are failing to meet expectations as developing nations up their ‘loss and damage’ demands into the trillions says Friends of Science Society. Climate catastrophe narrative falls apart as does the ‘green’ future in the face of the energy crisis. 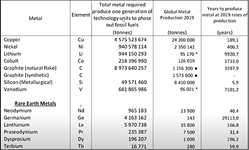 the reality shows "you can’t make a convincing case that green growth is possible" as Yvo de Boer predicted; it is the end of the climate catastrophe narrative. COP27 flails and fails.

As reported by EuroActiv on Nov. 10, 2022, the EU and US pushed back on the climate reparations related to COP27 negotiations; now preposterous ‘loss and damage’ claims by developing nations have spiraled into the trillions, as reported by CFACT, Nov. 16, 2022, meaning that COP27 is flailing and failing, says Friends of Science Society. Western nations have never even met their Green Climate Fund annual commitment of $100 billion/yr., promised at the 2015 COP-21 Paris Agreement as an inducement to developing nations.

Long-time climate policy analyst Robert Lyman wrote of COP27 that “It’s All About the Money.”

As cited by DW in a July 09, 2015 article, former UN climate chief Yvo de Boer famously said in 2013: "The only way that a 2015 agreement can achieve a 2-degree Celsius goal [3.6 degrees Fahrenheit] is to shut down the whole global economy …"

As reported by Friends of Science Society in “Lockdowns, NetZero and ESG Policies Won’t Stop Climate Change – Will Destroy Lives,” even 2 years of lockdown did nothing to reduce carbon dioxide concentrations.

Green growth and climate targets are clearly impossible, based on the detailed analysis of materials supplies for NetZero done by Simon Michaux for the Geologic Survey of Finland. Climate activists like Ketan Joshi reject the reality of this analysis, as outlined in his long twitter thread of Nov. 11, 2022. Indeed, non-engineers like Joshi underestimate the scope of requirements for reliable energy, as detailed in this “Costs of NetZero Electrification of the USA” by Ken Gregory of Friends of Science: “The total capital cost of electrification is herein estimated, using 2020 data, at US$290 trillion, or 13.5 times the U.S.A. 2019 gross domestic product.”

Friends of Science says lack of open, civil debate and full cost-benefit analysis of climate policies has led the world into the burgeoning global energy crisis – one fraught with shortages of fuel, fertilizer, and food – putting hundreds of millions of people at risk of famine. Pierre Kunsch, PhD. demonstrates “Decarbonizing electricity in the European Union: A programmed failure demonstrated by the figures.”

“We should have all asked for Paris agreements to help people to get out of their poverty, not by supplying them with almost useless solar and wind parks. This is a very expensive way to produce energy, whereas the reason why we are healthier and fitter today rather than two hundred years ago is exactly because we have cheap energy available, thanks to oil, coal, gas and nuclear power. And we should keep doing that. Global Warming is not at all a problem. We should let climate stay alone, it will take care of itself.”

Yvo de Boer claimed in 2010 ‘getting carbon pricing right’ was crucial to success. In Canada the “Axe the Tax” anti-carbon tax push rises. Canada has the sixth highest carbon price in the world. Friends of Science Society says Canada has gone “Too Far. Too Fast.”

Friends of Science says the reality shows "you can’t make a convincing case that green growth is possible" as Yvo de Boer predicted; it is the end of the climate catastrophe narrative. COP27 flails and fails.

THE UNSTOPPABLE GROWTH OF GLOBAL GHG EMISSIONS – Greening the Planet; Conning the PublicRegarding the Paris Agreement: Contrary to the general public perception, there are no international legal obligations to reduce GHG emissions and no legally-binding penalties for failing to do so.